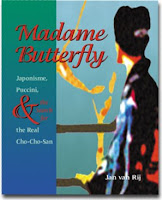 It’s too early in this blog’s life to expect any success in polling readers, but I’ll give it a shot: has anyone out there read Jan van Rij’s Madame Butterfly: Japonisme, Puccini, and the Search for the Real Cho-Cho San? If so, feel free to leave your impressions in a comment below. I hadn’t heard of the text until today but it looks fascinating. Van Rij sets out to explore the various sources of the Puccini opera, and while “the search for the real Cho-Cho San” makes it sound like it has National Enquirer potential, apparently the results are not only legitimate but legitimately shocking. I’d also be curious to pick it up because van Rij looks at how Butterfly is received in Japan, an issue well worth pondering. For a summary of the opera’s literary precedents, check out this link.

UPDATE (9/16/08): General Director and new father (congrats!) Allan Naplan has lent me his copy of the van Rij book; I’m glad to have come across it and will offer some feedback once I’m a little further along. 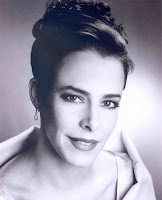 I had been in Madison just six days before my first trip to the Dane County Farmers’ Market. Madison had already shown itself to be an idyllic setting, with the imposing dome of the capitol building looming large over the city of pristine parks and sparkling lakes. However it was at the market that I began to realize why everyone I had met before and after arriving sang Madison’s praises almost to hyperbole (or so it seemed): this is a capital city with a small town feel, a tight-knit community where neighbors still believe in friendliness and “getting to know you.” Granted I’m coming from New York and more recently, Bangkok, much larger and arguably less-friendly towns. Still, there is a certain something about Madison that makes it special, and that something is most tangible at the Dane County Farmers’ Market.

This past Saturday I returned to the market with my Madison Opera shirt on and brochures in tow, ready to work our information booth with volunteer extraordinaire Hannah. It was great to talk about opera, Madison, and more with the local farmers, students, and curious passersby who stopped to say hello. One woman Hannah and I met turned out to be the cousin of Regina Resnik, the great mezzo-soprano! It was a lovely morning, and there seems to be real buzz about our new season. The gorgeous pictures we have of Jun Kaneko’s sets for Madama Butterfly are certainly helping, and it looks like the Overture Center box-office could be dealing with a lengthy line come October 6 when single tickets go on sale!

In the spirit of our first production of the 2008-09 season, I thought I’d post this beautiful animation by Jonathan Hills set to Felicia Weathers singing “Un Bel Di Vedremo” from Madama Butterfly.

Here is a description of the L’opera Imaginaire series from IMDB:

Like Fantasia (1940) or Allegro Non Troppo (1977), L’Opéra Imaginaire (1993) is an assembly of animated short films based on classic music greats. Directed by some of the best European animators and artists, L’Opéra Imaginaire takes us through dance, theater, music and painting masterpieces. It uses several animation techniques, like stop-motion clay animation or CG characters.

The Madison Opera blog is now officially up and running, and we’re glad you’ve found your way here. My name is Brian and I’m the new Manager of Communications and Community Outreach at Madison Opera. I’ll be writing most of the entries at The MadOpera Blog, but stay tuned for posts from our guest artists and General Director Allan E. Naplan. Along the way there will also be interviews with opera stars and conductors, stage managers and designers, staff and volunteers. We’re hoping this will be a place where you can learn all about what goes on behind the scenes at Madison Opera, from both artistic and administrative viewpoints. In addition to this lofty pursuit (perhaps even complementing it), The MadOpera Blog will inevitably host an amalgam of obscure opera clips from YouTube, musicological tangents, the occasional press release, and accounts of life in the Monroe Street office. That said, we’ll do our best to make this a fun blog to visit, a blog where even the seemingly most random post is somehow traceable back to our simple love of opera and core belief that more people can (and should) share this love.