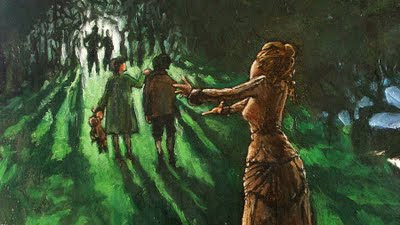 It’s that time again. Notebook ready? Study up on Benjamin Britten’s The Turn of the Screw with our guide to the best online resources available: Click/Read/Watch/Listen [pdf].

Explore the life of Benjamin Britten, from his early compositions to apotheosis as England’s great composer of the 20th century. Watch video of his BBC broadcasts with tenor Peter Pears or a cheesy and controversial 1982 film version of the opera (dubbed with fantastic vocal performances, I might add). Read the full text of Henry James’ original novella or a humourous abridged version of Myfanwy Piper’s libretto. There is much to discover and the links await, so go click, read, watch and listen.

Turn of the Screw painting by Christian Andrew Grooms. 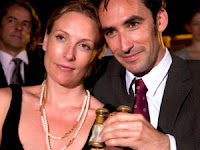 Two funny pieces about breaking down opera stereotypes recently came to my attention. The people over at The Guy’s Manual, an online series sponsored by MSN and Grape Nuts cereal, have come up with a list called “Why Opera is a Manly Art.” In Vancouver, a writer inspired by Vancouver Opera gives us “10 (Bad) Reasons to Hate Opera.”

“Why Opera is a Manly Art” is great for its range and wackiness: they start with “Mozart lent his cool factor to the genre” and end with “it will deceive your woman into thinking you’re sensitive.” It’s all lighthearted with a grain of truth. I particularly enjoyed this opening from writer Marc Freeman:

Do you remember that scene in “The Untouchables” when a weeping Al Capone attends the opera “Pagiliacci” while his henchman whacks Sean Connery’s Jim Malone? No one called Capone a sissy then and no one will call you one now. After all, there’s more to being a music man than playing “Guitar Hero.” Here’s why you can let your manly manliness emerge at the opera house.

In “10 (Bad) Reasons to Hate the Opera”, David Tracey gives us the typical complaints from opera-haters and then shoots them down. For instance, the No. 3 bad reason is “It’s expensive.” Tracey writes that while some seats have to be expensive to cover the huge cost of putting on an opera, there are always cheap seats to be found. In Madison, that means $16 or $20, not bad considering an evening ticket at Sundance Cinemas can be $13. He also points out that for the unitiated looking to just hear what opera sounds like, you can tune into the free Met Opera radio broadcasts, which in our neck of the woods run on WPR 88.7, starting Dec. 12.

If sex, murder, war, obsession, torture, love, politics and more murder don’t interest you… you might take a good look in the mirror. Maybe you’re the boring one?

Reason No. 7, “I don’t own a tux/gown,” has a Vancouver-centric response that easily translates to Madison:

This is Vancouver, where “elegant attire” means your fleece liner matches your raincoat.

Check them out, and let us know if you have anything to add to either list!