Opera in the Park 2011 was special for a few reasons before it even began. It was the free concert’s 10th annual outing and the final event of our 50th anniversary season, for starters. It was also a time to pay tribute to our beloved former general director and Opera in the Park co-founder Ann Stanke, who passed away in May. And it was also our new general director Kathryn Smith’s first event at the helm of Madison Opera, a grand welcome for her if ever there was one.

For those reasons alone, we knew that it would be a special night. But we could not have predicted the perfect weather, clear with a light breeze and an almost-full moon. And we could not have predicted the musical alchemy onstage between our soloists Maria Kanyova, Daniela Mack, Scott Ramsay, and Hyung Yun. I think we all know that the music is what it’s all about, and in the true spirit of Opera in the Park, the performances carried the night and are what stick with us today.

Before getting into some photos from Opera in the Park 2011, the entire Madison Opera family must first extend a huge thank you to everyone who generously contributed to the Opera in the Park Fund. It is my pleasure to announce that we have met our goal of raising $50,000! As part of our 50 for 50 campaign, you met the $25,000 challenge, which was then matched by a very generous friend of the opera. Hundreds of donations of all sizes played a role in meeting our goal, and we are so grateful for such an outpouring of community support.

And now, a look back to just two weeks ago…

“Such gorgeous music, hanging in the summer air, could make an opera lover out of anyone.” -Lindsay Christians, The Capital Times

Opera in the Park is set to go this Saturday night at 8 p.m. in Garner Park. Here’s everything you need to know to plan your evening: 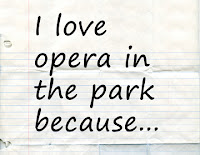 Write a “love letter” to Opera in the Park on our Facebook wall, and you could win 2 tickets to Tchaikovsky’s Eugene Onegin!

In the opera, Tatiana famously reveals her passionate love for Eugene Onegin in a letter. Now, we want YOU, our fans, to tell us why you love Opera in the Park in a post on our Facebook wall. Is it the lightstick conducting? The community atmosphere? The fabulous singers? The FREE? We want to know! Once you post, you’ll be entered in a drawing to win 2 tickets to Eugene Onegin, the opening production of Madison Opera’s 2011-2012 Season.

The competition starts now and closes on Wednesday, July 20th at 9 a.m. CST.

Here are some videos to get you excited for Opera in the Park, coming up this Saturday night!

Opera in the Park (coming up on July 16th!) makes a great introduction to opera for families with children of all ages. The relaxed outdoor atmosphere combined with a program that offers a dose of recognizable opera hits all help to make this one of Madison Opera’s most accessible and exciting events of the year. The price point of $0 also doesn’t hurt!

New this year is something even more enticing for the young ones: we’re told that Cinderella is making an appearance in Garner Park! Along the main path off of Rosa Road, keep an eye out for the Isthmus Parents booth, where children and parents are invited to stop and take a picture with Cinderella. The maid-turned-princess is making an early stop in Madison before she stars in Rossini’s opera in Overture Hall next April.

Cool down in the pool and warm up your vocal chords

In anticipation of Opera in the Park that night, the Goodman Pool is hosting “Opera in the Pool” from 1 to 3 PM on Saturday, July 16th. Sing along to your favorite tunes while enjoying a dip in the pool as all swimmers have a chance with the Goodman’s karaoke machine.