Live from the Madison Opera Center

Married singers Jeni Houser and David Blalock have a long history with Madison Opera. Jeni was one of our first Studio Artists in 2012, and has returned many times, most recently as Anne in A Little Night Music. David debuted in Fidelio (2014), and both artists sang at Opera in the Park 2019. This past season, Jeni and David made (separate) Metropolitan Opera debuts, and were slated to sing the leads in Orpheus in the Underworld in Madison.

The Wisconsin residents will launch our Live from the Madison Opera Center series in a joint recital, accompanied by principal pianist Scott Gendel.

The recital features the world premiere of Gendel’s song cycle “Keep Moving,” which he is writing specifically for Jeni and David. Set to poetry by Maggie Smith, “Keep Moving” is about new beginnings as opportunities for transformation. Smith’s book “Keep Moving: Notes on Loss, Creativity, and Change” will be published two weeks after the song cycle premieres.

Other repertoire includes arias and duets from Falstaff, The Pirates of Penzance, and American folk songs.

Live from the Madison Opera Center is part of our Digital Fall Season, which lasts from September through December, and includes both digital content and live performances at the Margaret C. Winston Madison Opera Center, our home in downtown Madison.

A Digital Fall subscription is $50 per household. All content will be available to subscribers for at least one month from the “live” date, so you can watch at your leisure, and as often as you wish. 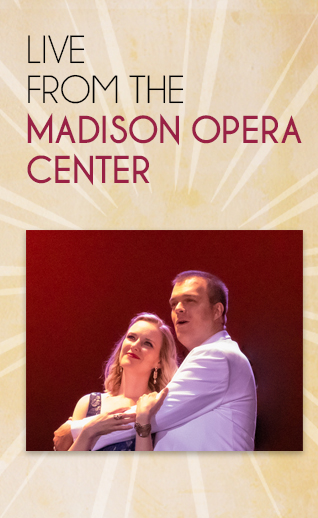