Madison Opera has a new and improved Facebook page. Before, we functioned as a “group” on Facebook that people became “members” of, but now we are an officially registered organization that people can become “fans” of. It’s a little confusing, but basically pages are a more recent phenomenon that allow for lots of cool things. For instance, after I write this, it will show up on our new Facebook page. After I post a video to YouTube, it will show up on Facebook. Our event listings are neater on the new page, and it also allows for the rapid fire sharing of links and photos and any thought that crosses my mind, really, sort of like Twitter (but I’m not going there quite yet). On the surface it all looks the same (website, blog, Facebook), and in many ways the information is the same, but it’s being presented differently, and with different levels of user intereaction (Facebook being the most interactive, the website being the least). So take the plunge, and become an official fan of Madison Opera at our Facebook page! 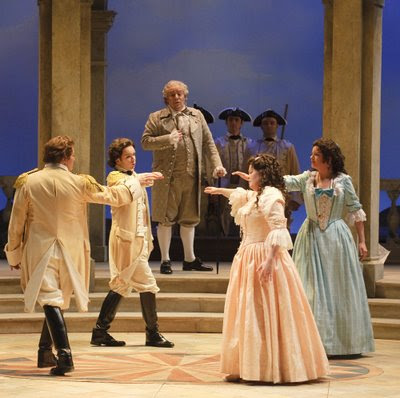 It’s always sad when a production ends, but as the couples sing at the conclusion of Cosi fan Tutte, “Happy is the man who looks / At everything on the bright side.” And that’s pretty easy to do right now: audiences loved it, as did the critics (click here and here to read reviews), and we sold out the Capitol Theater for both performances. Onward and upward to Faust!

UPDATE (12:13 p.m.): A review from The Isthmus is now posted here. “Madison Opera’s production of Mozart’s Così fan tutte (‘All women are like that’), was a musical feast and a visual delight, ideally fitted to Overture Center’s Capitol Theater.” 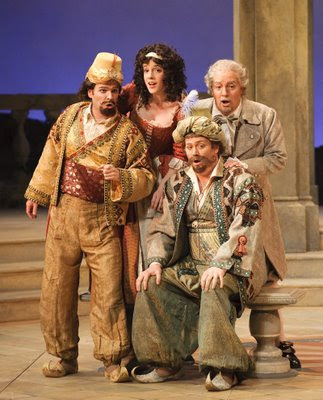 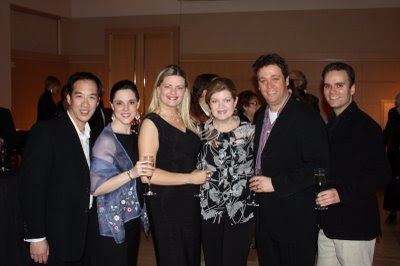 The Cosi fan Tutte cast after the show
The first review is in from the Wisconsin State Journal and the entire cast gets kudos for a “well sung, well acted, well staged, nicely directed, and intelligently played” production of Cosi. Most importantly, the sold-out crowd in the Capitol Theater was loving it, laughing heartily and clearly enchanted by the music. Can’t wait for Sunday! 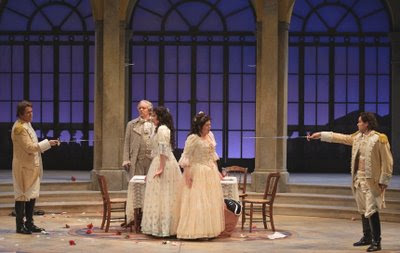 I won’t hold a sword to you or anything like that, but I will say that we’re 99% sold for performances of Cosi fan Tutte tonight and Sunday: this is your last chance!

Waiting in the Overture Center lobby for my ride after the dress rehearsal last night, I overheard a high-school aged student (likely an orchestra member’s kid) in conversation actually say, “I never knew opera could be funny.” It may have been more like, “Like, seriously, I never knew opera could be funny, and I mean, I LOVE Mozart.” It was music to my ears…seriously.