Brecht is the key figure of our time, and all theatre work today at some point starts from or returns to his statements and achievement. – Peter Brook
Bertolt Brecht, along with composer Kurt Weill, created Madison Opera’s next production, The Threepenny Opera. This is our first venture in to Brecht’s works and we’re excited to have our return to musical theatre be with a piece of this caliber. Here’s an introduction to one of the most influential figures in theatre of all time: Bertolt Brecht.

When Brecht entered the theatre world in the 1920’s, he started a revolution. Brecht was devoted to the concept that theatre should serve a social purpose. To encourage his audience to think critically about the political themes in his plays, he developed a style that he named ‘Epic Theater.’ This style is now commonly referred to as ‘Brechtian.’
Brechtian theatre techniques are designed to alienate or distance the audience. However, the goal is not that the audience does not feel any emotions, but instead that they feel different emotions than the characters on the stage. So it is perfectly acceptable to feel sympathy for the characters, but not empathy. Brecht believed that when the audience identified emotionally with the characters, they lost the ability to think critically about what was happening on stage and apply it to the world around them. In Brecht’s words:
As we cannot invite the audience to fling itself into the story as if it were a river and let itself be carried vaguely hither and thither, the individual episodes have to be knotted together in such a way that the knots are easily noticed. The episodes must not succeed one another indistinguishably but must give us a chance to interpose our judgment.
Brecht had specific techniques designed to create that critical distance. These included using unusual vocabulary and language, harsh lighting and the removal of the ‘fourth wall.’ The fourth wall refers to the imaginary line between the play and the audience. To break the fourth wall, characters in Brecht’s work would often speak directly to the audience, which reminds the audience that the play is a representation of reality, not actual reality. 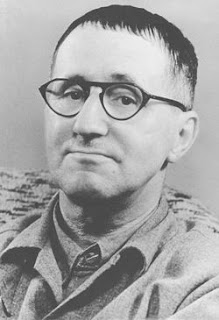 Another distancing technique Brecht employed was inserting songs in to his works to break up the action. This, as well as Brecht’s strong belief in collaboration, led to a partnership with Kurt Weill that lasted for years. In addition to Threepenny, Brecht and Weill collaborated together on a number of musicals, including Happy End and Rise and Fall of the City of Mahogany. However, The Threepenny Opera is by far their most successful and widely produced musical.
Today in Germany, Brecht’s works are produced more often than Shakespeare. While Brecht was socially motivated, his works are still dazzling, entertaining and powerful.

Art ought to be a means of education, but its purpose is to give pleasure. –Bertolt Brecht

The Wisconsin winter is conducive to reflection, and so it feels right that we continue our series on Madison Opera history today. It perhaps is especially appropriate because it was in December 1962 that plans were busily coming together for Madison Opera’s first fully staged, full length performance of an opera.

Last we left off, the Johnsons had arrived in Madison, the Opera Workshop had been born, and the new ensemble debuted with “A Night in Vienna.” The reviews were encouraging, and a May 28, 1962 profile in The Milwaukee Journal was titled “Opera Sounds New Note in Madison: Roland Johnsons lead renaissance.” The piece opened by stating “The birth–and apparently successful debut–of the Madison Civic Opera Workshop surprised no one more than Mrs. Roland Johnson.” The writer goes on to note that though Arline Johnson had determined to retire temporarily from music after leaving Alabama, the enthusiasm of local singers to venture into operatic repertoire upon her arrival in 1961 made her continuing involvement inevitable. After “A Night in Vienna,” plans had already been laid for a full production of La boheme the next year:

“Next May we plan to do a full length ‘La Boheme,'” [Roland] Johnson said, “and we think we have enough local singers to do a good job. It is terribly familiar and we will do it in English, so it should be a good bridge for reaching the audience for musicals.”

Puccini came knocking sooner than expected. On November 8, 1962, Viola A. Ward wrote to her friends and peers in the community that Madison had determined to launch its own Civic Opera Group, which was to present a fully staged production of La Boheme. She stated that it was imperative to form a supporting guild to sponsor the event: “This is not a money making event as such. If the enthusiastic support of an opera guild can achieve sell-out performances, the project will support itself financially.” She invited guests over for desserts and coffee on November 15th, and it is safe to conclude that on that evening opera in Madison started to look like a sustainable venture, as a Guild was formed with the purposes of:

The local papers were abuzz. Sets were being built with the cooperation of the Madison Theater Guild. Over 75 local singers, as well as the Madison Symphony Orchestra, were set to perform. And despite the fact that no auditorium in Madison had a pit for the orchestra, a suitable situation was arranged at Madison East High School. The Capital Times wrote in December that “The atmosphere for the initial presentation will be colorful and intimate as though it were being done in France.” The Wisconsin State Journal published an editorial with the headline, “Don’t Miss City’s New Opera.” Tickets for $3, $2, $1.50, and $1 were sold in advance at Manchester’s, Ward-Brodt, Forbes Meagher, Victor, and Monona Grove Music House. A dress rehearsal was broadcast on local radio station WHA the Sunday prior to the premiere, featuring intermission interviews with Roland and Arline Johnson. 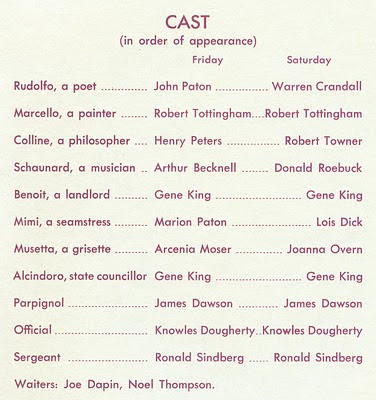 By all accounts, La Boheme was a huge success. In The Wisconsin State Journal society pages, Louise C. Marston wrote:

It came off with professional finesse before a loyal but critical audience which enjoyed every second of it – and showed it by enthusiastic clapping and a few sophisticated “Bravos” at the right moments. The audience, which filled the rather hard seats of East High School’s auditorium to overflowing, managed to look quite “dressy” despite jillions of boots and galoshes, sensibly donned in view of the night’s heavy snowfall.

Madison’s fledgling Civic Opera tried its wings Friday night, and its first flight was a delightful one into musical fancy…The music and action had its desired effect – one wanted to cry. But shouted “Bravo” instead. The whole performance, using all home talent and sung in English, was a valiant effort and a good one…But it was Roland Johnson, director of the orchestra, and Mrs. Johnson who masterminded the whole production, and have given this city a budding opera troupe.

And like that, the Opera Workshop of 1961 and 1962 became the Madison Civic Opera, a true company with the goodwill of the city of Madison behind it. Enjoy these photos of the first La Boheme in Madison: 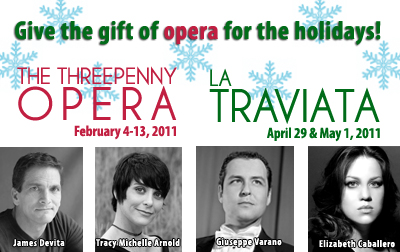 Yes, we say it every year, but hey, it’s true: opera tickets make a great holiday gift! This year especially, we can promise that tickets to the remaining productions of our irresistible 50th Anniversary Season will be a hit with aficionados and newbies alike:

The Threepenny Opera, FEB 4 – 13, 2011 | The Playhouse: Kurt Weill’s jazz and operetta infused score, Brecht’s gritty drama, and the star power of James DeVita and Tracy Michelle Arnold: what’s not to love? Have we mentioned Dorothy Danner is directing, and John DeMain is conducting? Mack the Knife is coming to town, and you don’t want to miss him.

La Traviata, APR 29 & MAY 1, 2011 | Overture Hall: Verdi’s classic tells the story of the free-spirited Parisian party-girl Violetta, who falls hard for the romantic Alfredo, and it’s all brought to life with some of the most memorable operatic music ever written. Madison Opera’s production features gorgeous sets from the Lyric Opera of Chicago, the return of soprano Elizabeth Caballero, and the US debut of Italian tenor Giuseppe Varano.