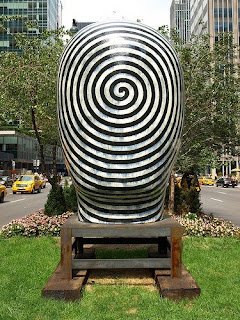 As November and Puccini rehearsals near, I’ll be checking in on our guest artists and designers to figure out what they’re doing before it’s time they head to Madison.

Jun Kaneko is the set and costume designer for our Madama Butterfly, a production that premiered at Opera Omaha in 2006. (Kaneko is originally from Japan, though he spent his youth in California and his studio has been in Omaha since 1986). He’s an internationally renowned ceramic artist, and this Butterfly was his first design for the stage. Kaneko is presently getting a second crack at in Pennsylvania, where he’s designing Beethoven’s Fidelio for the Opera Company of Philadelphia. The production runs from October 10 to 24.

If you happen to be in New York before October 31st, be sure to take a stroll along Park Avenue between 52nd and 54th Streets. Here you’ll find massive heads sculpted by Kaneko, one of his trademarks. A 2007 feature in the New York Times on Kaneko’s work, titled “Giants of the Heartland” by Michael Kimmelman, is also a good preview of what’s to come!

The inclusion of the arts in a broad sense is wonderful. The link to “Giants of the Heartland” was breathtaking. Both the story of when Jun was 17 and the power of his work. Seems his life is in another dimension. brd