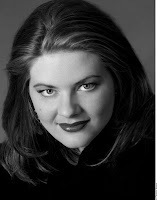 Mezzo-soprano Laura Vlasak Nolen recently joined our Cosi fan Tutte cast as Dorabella (replacing Michele Losier–these things happen in opera!), and we are very excited to have her. Laura had quite a 2008, making her Met debut, singing at the Spoleto Festival USA, earning raves in the title role of Giulio Cesare at Glimmerglass Opera, crossing the pond to the Wexford Festival in Ireland to star as Dorotea in Tutti in Maschera (under the baton of our Butterfly conductor Leonardo Vordoni), and performing Elgar’s The Music Makers with the Dallas Symphony Orchestra. 2009 is also o

ff to a great start for Laura, who just made her Carnegie Hall debut in New York City Opera’s concert performances of Barber’s Antony and Cleopatra. If you visit her blog, you can read that she’s now taking some time to prepare Dorabella, a role she calls “fabulous” and “a perfect personality match.” After her last performance of Cosi in Madison on March 15 (literally right after), she jets back to New York for rehearsals at the Met on March 16 for Waltraute in Die Walkure. I’m out of breath just typing it.

0 comments on “Eye on the cast: Laura Vlasak Nolen”