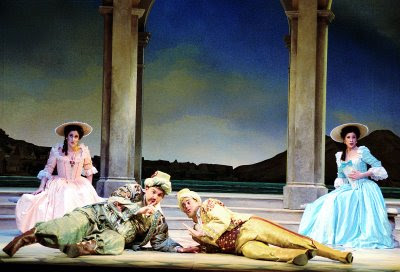 NPR’s “World of Opera” offers an insightful introduction to Cosi fan Tutte that captures the dilemma that has come to define the work: is it comedy or drama? The answer of course is that Cosi is both, the problem being that it in turn veers to the extremes of both. It’s all fun and games, disguises and accents, until Fiordiligi and Dorabella begin to yield to the temptations foolishly put forth in jest by Ferrando and Guglielmo. Many think this dichotomy is rooted in the difference in tone between da Ponte’s libretto and Mozart’s music: critics of the last two centuries have called da Ponte’s libretto shallow, arguing that only
Mozart’s music infuses any complexity. Undeniably the sheer beauty of the music forces one to at least occasionally take the on-stage antics seriously.

Mozart is always complicating matters though, because he is also a master of jovial tunes that so perfectly capture the naivety of the characters, and some argue that to take Cosi too seriously, to impose any sort of modern psychology on it, is to miss the point: Mozart and da Ponte were writing to entertain with this one.

It’s easy to talk in circles about this, which is one of the joys of the work. Make sure to listen to the brief audio introduction provided by NPR, and they’ll tell you why Cosi falls somewhere in between I Love Lucy and Perry Mason.

Photo: A scene from Cosi fan Tutte, with Ferrando and Guglielmo in disguise, testing the faithfulness of their ladies Fiordiligi and Dorabella. Courtesy Sarasota Opera; Madison Opera will be using the sets and costumes of this production.

0 comments on “Comedy or drama? The Cosi Dilemma”