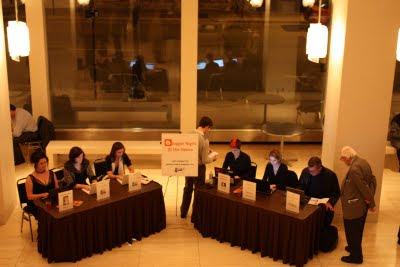 Thank you to the adventurous group of writers who came out to Carmen last night for our first Blogger Night at the Opera. It was something of a marathon, with those intermission chimes looming like a school bell at the end of an assignment-packed study hall. But they did it, and here’s some of what they had to say (click the links for full posts):

Is it hyperbolic to say that I’m sitting here at the intersection of New Media and Old Art?…A few passers-by have expressed amazement, amusement, or ouright disbelief that we’re live-blogging, which I take as decisive victory…It’s certainly a noisily appreciative audience– a pleasure to note, since Madison audiences can be reticent with their applause and cheers…Second intermission. Katharine Goeldner’s voice sounds like caramel and bonfires– she sings warmly and brings a beautiful danger to the role. A co-worker of mine is in the chorus and it’s great fun to track him in his various costumes. (Hi, Will!) I had no idea how many famous songs come from this opera. In the women’s bathroom more than one woman was humming “Toreador” under her breath.

Emily Mills of The Lost Albatross:

So far so good. It’s easy to forget (or just not know in the first place) that a lot of the music from “Carmen” has permeated our popular culture…And I had to laugh – Carmen is one of the girls who works at a cigarette factory and, naturally, almost all of them smoke. Very un-PC, all that puffing and tobacco enjoyment. Had this been written and produced in modern times, I suspect the cigarette factory might have been replaced by, say, a solar cell manufacturing plant. Hah! The bells are chiming, back to it…The main lesson I’m taking from this story is that women are tricksy, and men are easily duped fools. Basically, a tale as old as time. But told with such flare! And plenty of soaring lyrics, dance, and color. Can’t complain, really. I do appreciate the high drama and production value, and frankly, there just isn’t enough of this in mainstream culture these days. Unless you count “Glee,” which I do, but it’s only one show after all.

The audience applauds loudly at the end of the first Flamenco song and dance. The atmosphere is ripe with Spain. The music is infectious among the audience members, some in suits and expensive dresses, others dressed much more casually…Whether you look at the sets, costumes and lighting; listen to the singing and instrumental playing; or take caught up in the acting — this enjoyable production is thoroughly virtuosic. It has juice…Is there consistently high quality throughout the roles and the various scenes and acts? Yes, and it continues in a cast that is well matched and well balanced, and in a staging that is effective, unpredictable and at times even daring. It all makes for art that is entertaining, which is exactly what Bizet had in mind when he wrote the work as a comic opera.

Tonight’s performance is sold out, and I think that’s really cool. I’ve often thought about how great it would be if an arts event created as much anticipation and brought out as many die-hard fans as the sporting events that help create our city’s reputation. So it’s fun not only to watch what’s happening tonight, but also to be a part of it…I liked the visual contrast between the soldiers, including Don Jose, in their sunflower gold jackets and the townspeople, whose clothes were as sun-bleached as the building walls of the setting. Like the soldiers, Carmen stood out from everyone else. While other woman working in the cigarette factory looked somewhat dull, she shined in a bright white top and raven hair. The soldiers weren’t the only ones captivated by her. I don’t know how anyone in the audience could keep their eyes off her languid movements and sultry singing….I must say, I’m surprised by how vibrant, physical and sensual this production has been. And I mean that in a good way. This has been different from any other opera I’ve seen.

Looking around a little more, I’m realizing that “fashion at the Madison Opera” is as diverse is it comes. There is glitter and there are floor length gowns…there are blazers, plaid shirts, argyle sweaters, jeans, slacks…everything! The theme here is ‘anything goes’—and I love it….It’s so fun to see all the components from my backstage tour actually on stage! The wigs were one of my favorite parts to see in action—they truly look like they’re made for the women (good work, Jan!)…The Spanish skirts are fantastic—very flowy, the kind of skirt you wear and just HAVE to dance in. Another note: many of the gypsy women are wearing peasant tops , very much like the one’s I’ve seen on the market today…I think my final verdict on this show is that it’s something everyone should experience at least once in their life. I, for one, hope to experience it more than once, as it was absolutely breathtaking. I don’t have the eloquent, perfect words to describe it like a true show reviewer (maybe someday…), but for now, I’ll just say: Wow.

Sarah DeRoo of In the Know:

First intermission and I have to say that I’m enjoying myself. It’s overwhelming to take in every little part of this massive production…I’ve decided that the character of Carmen (played by Katharine Goeldner in her Madison Opera debut) is my idol. 1. She’s sexy. You should see how the men swoon for her and the women (all but one, so far) follow her. 2. Outwardly, she’s sassy, brash, and appears onstage in Act I with a confident swagger—head held high. 3. She’s unapologetic. Takes no prisoners. Fights with the women…takes on the men. Basically, she rocks. And she can sing. What more can you want?…The curtain has drawn. Bows have been taken to a standing ovation. Patrons are streaming out of the packed house. We should be proud, as a community, that we have an opera company to call our own. I know I am…Final cough drop count: 11.

I think the presence of bloggers at the opera adds another facet to what is already the most complex musical genre. On another note, is that John Barker talking to Jake in the picture???