The Turn of the Screw is currently sold-out for this weekend, but we do still have seats available for tonight: go ahead and get your tickets now! The opera clocks in at 2 hours, so DVR “The Office” and come out for a night of music drama you won’t soon forget. To quote our director, “Let the haunting begin…” 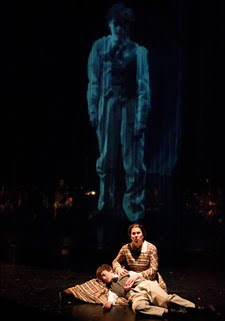 Interested in reading more about our new production? Check out these previews:

We left off a month ago (sorry for the delay!) with Benjamin Britten as a young man at the Royal College of Music in London beginning to find his musical voice. In 1933, he composed the choral variations for unaccompanied voices A Boy was Born. When the work was broadcast by the BBC in February 1934, Britten immediately gained recognition as a composer of great promise. The same year, his Phantasy was chosen for performance at the International Society for Contemporary Music Festival in Florence. While away at the festival, Britten’s father passed away. 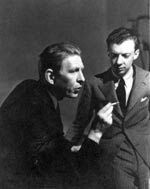 By this time Britten was already signed up as a composer for Boosey and Hawkes publishing house, and he soon also was employed by the General Post Office Film Unit. The GPO produced a series of documentaries that examined aspects of English life, particularly in the world of industry. It was here that Britten first collaborated with the poet W.H. Auden, who wrote the narrative for some of the films with Britten’s music. During this period, Britten also used a text by Auden for his symphonic song cycle Our Hunting Fathers, written for the Norwich Festival in 1936. A new play by Alan Bennett, titled “The Habit of Art,” examines the creative relationship between Britten and Auden (pictured left).

In 1937, Britten was devastated by the sudden death of his mother. Shortly after, a close friend of his, Peter Burra, was killed in a plane crash. However it was out of this latter tragedy that he came to know the young singer Peter Pears: they were both left to sort out Burra’s papers, and in turn became friends. This friendship would develop into a life-long personal and artistic partnership. Throughout the late 1930s, Britten was receiving commissions for film music from the BBC and for incidental music for the theatre.

Despite new fame in his native country, Britten was frustrated by the opportunities or lack thereof available in England and so in 1939, he and Peter Pears followed Auden and the playwright Christopher Isherwood to the United States. They gave concerts throughout the US and Canada, with the goal of ending up in Hollywood where they had a tentative film commission. However, they ended up on Long Island, and when war broke out in September 1939, despite their wanting to return home, they were encouraged to stay in the US in order to increase sympathy for Britain there. After the US entered the war, Britten and Pears tried to go home again but faced enormous difficulty getting visas. 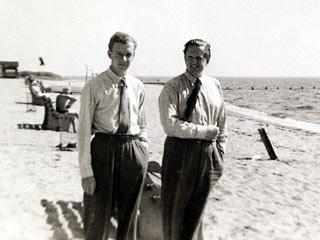 Britten and Pears at Jones Beach on Long Island, NY

And so their little trip across the Atlantic would last three years, until 1942. While in America, Britten write his Violin Concerto, which was premiered by the New York Philharmonic Orchestra, and other instrument works including Young Apollo for piano, string quartet and string orchestra, Canadian Carnival and the Sinfonia da Requiem in memory of his parents. Most significantly, however, was another collaboration with Auden. 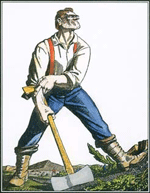 In 1940, Britten and Pears moved into a house in Brooklyn Heights with Auden and other artists, where they collaborated on the operetta Paul Bunyan, based on the classic American folk tale. It premiered at Columbia University and was well received, though both Britten and Auden would distance themselves from the work later. This was Britten’s first full music drama, though there would be many more to come as he matured into the mid-twentieth century’s most prolific and arguably most popular operatic composer.

Come back to the MadOpera Blog throughout the week as we examine Britten’s life and work in anticipation of The Turn of the Screw, which opens Thursday, and visit the wonderful Britten-Pears Foundation website for much more information on the composer.

Last night, our fantastic cast was at work rehearsing the final scenes of Act II of The Turn of the Screw in the Rotunda Studio at Overture. 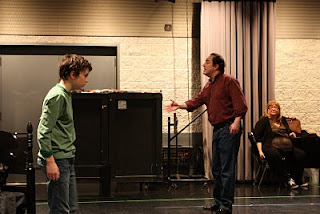 “Easy to take, easy to take…take it! take it!”
Alistair Sewell as Miles and Gregory Schmidt as Quint. 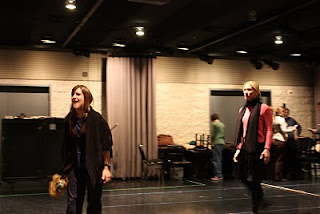 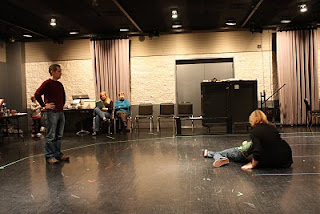 “Ah! Don’t leave me now!”
Caroline Worra as The Governess holds Miles in the final moments of the opera, directed by Doug Scholz-Carlson. 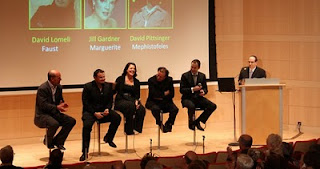 For the rest of the 2009-2010 Season, Opera Up Close will begin at 1 p.m. at the Museum of Contemporary Art Lecture Hall, instead of the traditional 4 p.m. start time.

Additionally, Opera Up Close: The Turn of the Screw Preview will offer a slightly different program than usual. As in the past, General Director Allan Naplan will offer an engaging presentation on the music and history of the opera and host a discussion with our guest artists, including Caroline Worra, Gregory Schmidt, John DeMain and Doug Scholz-Carlson. However, following this segment, we are excited to offer a complimentary screening of the classic 1961 film The Innocents. Based on The Turn of the Screw, the film is a masterful telling of Henry James’ chilling ghost story, which of course also serves as the basis for Benjamin Britten’s opera.

Opera Up Close: The Turn of the Screw Preview