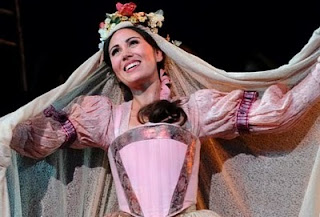 Soprano Anya Matanovic has been called “radiant”, “sweetly winning”, and “glorious” by critics from Seattle to Cleveland to Jerusalem. And you can hear her at Opera in the Park this Saturday.

Born in Madison, Wisconsin and raised in Issaquah, Washington to a Slovenian father and American mother, Anya now calls New York City her home. From there, she brings her “thrilling” voice to opera stages across the country. Anya made her professional opera debut, directly from her undergraduate studies at USC, as Mimì in the Los Angeles commercial engagement of Baz Luhrmann’s Tony Award-winning production of La Bohème. More recent engagements include work with the New Israeli Opera, Seattle Opera, Kentucky Opera and Opera Cleveland.

At Opera in the Park, Anya will sing highlights from The Marriage of Figaro as Susanna, a role she’ll reprise with Madison Opera in the fall, in addition to displaying the vocal fireworks of Violetta’s “Sempre libera” aria from La Traviata.

Welcome back to Madison, Anya!