Blog
With only six weeks remaining until our production of Mozart’s The Marriage of Figaro, we turn the spotlight to someone who often doesn’t receive much attention: Mozart’s wife, Constanze Weber. Their courtship was scandalous and their married life tragic, but there is no denying the impact she had on Mozart’s life. 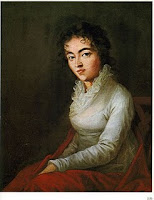 A trained musician herself, Contanze originally met Mozart when he fell in love with her older sister, Aloysia. Aloysia rejected Mozart and married someone else, but four years later Mozart ended up boarding in the Weber home. When it became clear that Mozart was pursuing Constanze, now 19, the Weber’s asked him to leave. The romance continued despite opposition from Mozart’s father, Leopold. Without Leopold’s permission to marry, the two lived together without a wedding. On July 31, 1782, Mozart wrote the following to his father:
“All the good and well-intentioned advice you have sent fails to address the case of a man who has already gone so far with a maiden.” 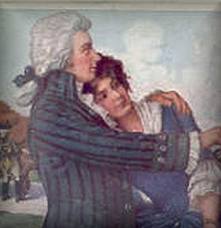 Some historians believe that Constanze’s mother threatened to call the police if they did not remedy this situation, and the two were married on August 4th, 1782.
In the nine years that the couple was married, Constanze delivered 6 children, only two of whom reached their first birthday. The tragedies they dealt with are thought to have a put a strain on their marriage and some believed that Constanze began a long term affair. This is disputed by others; the Grove Dictionary of Music and Musicians claims that assertion to be unfair:
“Early 20th-century scholarship severely criticized her as unintelligent, unmusical and even unfaithful, and as a neglectful and unworthy wife to Mozart. Such assessments were based on no good evidence.”
What can be known for certain is that Constanze was only 29 when Mozart died in 1791, deeply in debt and with two small children. Constanze built a life for herself by organizing memorial concerts and publishing her husband’s works, eventually doing quite well for herself financially. She remarried in 1809 to a Danish diplomat and writer, who worked with her on Mozart’s biography before his death in 1826. Constanze lived as a widow for another 18 years. She was 80 years old.
We will be digging deeper into Constanze’s life in the Madison Opera Book Club with our first book of the season, Marrying Mozart by Stephanie Cowell. Be sure to join us when we meet on October 30th!
-Laura, Marketing/Development Associate