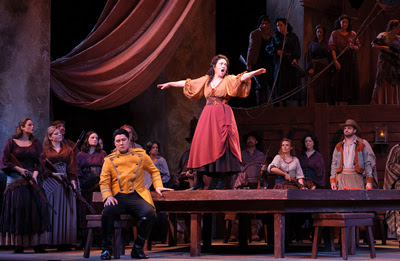 Last year, Madison Opera audiences were mesmerized by Katharine Goeldner’s smoldering portrayal of the title-role in Carmen. Tomorrow night, she brings Bizet’s notorious femme fatale to life again, this time for the Lyric Opera of Chicago.

Originally slated for one performance as Carmen in Chicago, Goeldner will now portray the title-role gypsy in all six October performances. We know Lyric audiences are in for a treat, and we’re sending Katharine a hearty “Toi, toi, toi” from Madison!

And guess what, Katharine isn’t the only Madison Opera “alum” in this Carmen production. Escamillo will be sung by Kyle Ketelsen, most recently seen in Madison as Raimondo in Lucia di Lammermoor (2008). Additionally, in March performances, Nicole Cabell–our Pamina in The Magic Flute (2006)–will portray Micaela.