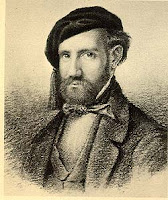 NPR reports today that Italy is in the midst of celebrations marking the 150th anniversary of the country’s unification. Giuseppe Verdi, the composer of La Traviata, somewhat unwittingly created the movement’s “theme music” when his opera Nabucco premiered in 1842. In the third act of Nabucco, the exiled and defeated Jews sing a beautiful chorus, Va, pensiero, longing for their homeland. It’s simple, folk quality, the swelling music, and the content of the lyrics (“Oh, my country so beautiful and lost! Oh, remembrance so dear and so fatal!”) struck a nationalistic nerve, and it does so to this day. In fact, at a 2005 performance of Nabucco in Verona, I witnessed an audience of thousands singing along to the chorus and demanding an encore mid-performance, something simply unheard of in the U.S.! Here’s the famous piece, and below, find some important dates in the history of the Italian unification movement as they correspond to Giuseppe Verdi’s life.

1813: Giuseppe Verdi is born in Busseto, Italy, then part of the First French Empire, under the rule of Napoleon
1814: Napoleon is defeated and is exiled to St. Elba
1815: Napoleon escapes, but is defeated again at the Battle of Waterloo; Congress of Vienna restores Austrian rule to the Kingdom of Italy
1836: Verdi marries first wife, his childhood sweetheart
1839: Verdi‘s first opera, Oberto, premieres at La Scala in Milan
1842: Premiere of Verdi‘s Nabucco, in which the plight of the oppressed Jews was instantly compared to the plight of the Northern Italians under the Austrian Empire
1848: Revolution of 1848 in France results in the establishment of the Second French Republic, spreads revolutionary movements throughout Europe, including Italy; death of bel canto opera composer Gaetano Donizetti
1853: Premiere of Verdi‘s La Traviata at La Fenice in Venice
1859: War in Italy gradually removes Austrian rulers from northern states
1861: First Italian parliament is called, at peak of unification process, and Rome is declared the capitol of Italy
1866: Austria cedes rule of Venice to Italy
1870: Rome is seized from the Pope by the Italian army, effectively ending the battle for Italian unification