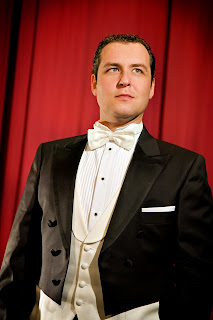 Buzz has been building for some time now around the the U.S. debut of Italian tenor Giuseppe Varano. His 2010 performances as Pinkerton in Madama Butterfly at the Savonlinna Opera Festival in Finland earned Mr. Varano praise for his “shining” (Osterbottens Tidning) and “breathtaking” (Das Opernglas) voice. A young tenor on the rise with credits throughout Europe, he has also recently appeared as Pinkerton at the Teatro Comunale in Bologna and as Alfredo at Opera Graz, opposite Marlis Petersen as Violetta. Other highlights include Rodolfo in La bohème at the opera houses of Messina, Rimini and Leipzig, and the title role in Faust at the Teatre Principal de Palma in Spain. Future engagements include debuts at Pittsburgh Opera, Opera Colorado and Deutsche Opera am Rhein.

On a personal note, Giuseppe has proved an exceptionally gracious colleague and has expressed great pride as the cast’s “Italian ambassador.” We feel incredibly lucky to have him with us, and look forward to some exciting Verdi singing in La Traviata next week!

(Just in case you can’t wait until next week, check out Giuseppe’s YouTube channel, with excerpts from past productions.)