Last week, Madison Opera proudly participated in the culminating event of the Overture Center Arts Education Initiative, a project that has been two years in the making. A cooperative effort between the Overture Center, five of its resident companies, and the Madison Metropolitan School District, the Arts Education Initiative places teaching artists in local schools for residencies and provides access to resident company performances at Overture; in addition, the Initiative engages interested students in a ten-week after-school program in the arts. Not to mention, prior to this first season of executing the program, which is funded by the National Endowment for the Arts, school teachers, resident company teaching artists, and resident company administrators participated in multiple professional development seminars in arts and creativity education. In short, the Arts Education Initiative makes the Overture Center and performances by resident companies like Madison Opera more accessible to students and teachers in the community, while also bringing art and art education to the classroom – and not just to elective arts classrooms, but to math, social studies, humanities and science classrooms, ensuring creativity has no bounds. 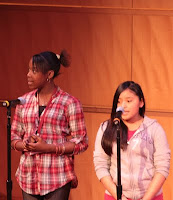 Here’s how the Initiative worked for Madison Opera: after a year of planning and training, our teaching artist Saira Frank worked with 6th grade classes at Cherokee Middle School, introducing them to opera and in particular to Verdi’s La Traviata. After participating in a variety of activities based on the aesthetic education model centered on La Traviata, the students saw the piece performed live in Overture Hall at Madison Opera’s recent Student Matinee. Not only did the classes Saira worked with attend, but the entire 6th grade of Cherokee Middle School was there! 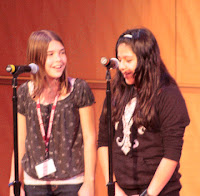 Following the in-school residency and performance components of the Initiative came the after-school program. At the after-school program, students from Sherman and Cherokee Middle Schools broke into different specialties to create their own artistic works inspired by the Shinique Smith exhibit at MMoCA.Over ten sessions, the vocal students worked with Saira to filter their ideas and feelings about Shinique Smith’s artwork into songs, or “arias,” that they then performed last Thursday. Working in pairs, the students wrote their own lyrics and set them to existing arias that fit the mood and atmosphere of the Shinique Smith work they were inspired by. The results were pretty incredible, and we are beyond thrilled that the Overture Center for the Arts has already received a new $37,000 grant from the NEA to continue the Arts Education Initiative next year. 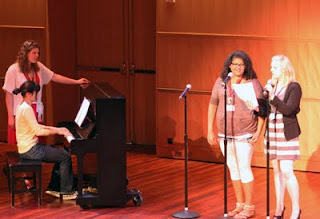 Ann Stanke, Madison Opera’s general director from 1984 to 2005 and a coach, accompanist, and manager for nearly all of the company’s 50 years, passed away on May 18th at the age of 76, following a 22-month long battle with ALS. It is hard to adequately express her contribution to our company and community, but several local writers have done so. You can read about her extraordinary life and impact below:

Relive the magic of Madison Opera’s The Marriage of Figaro and La Traviata starting this Saturday on Wisconsin Public Radio!

How to listen – Click here to listen online, or tune into 88.7 WERN if you’re in the Dane County region. 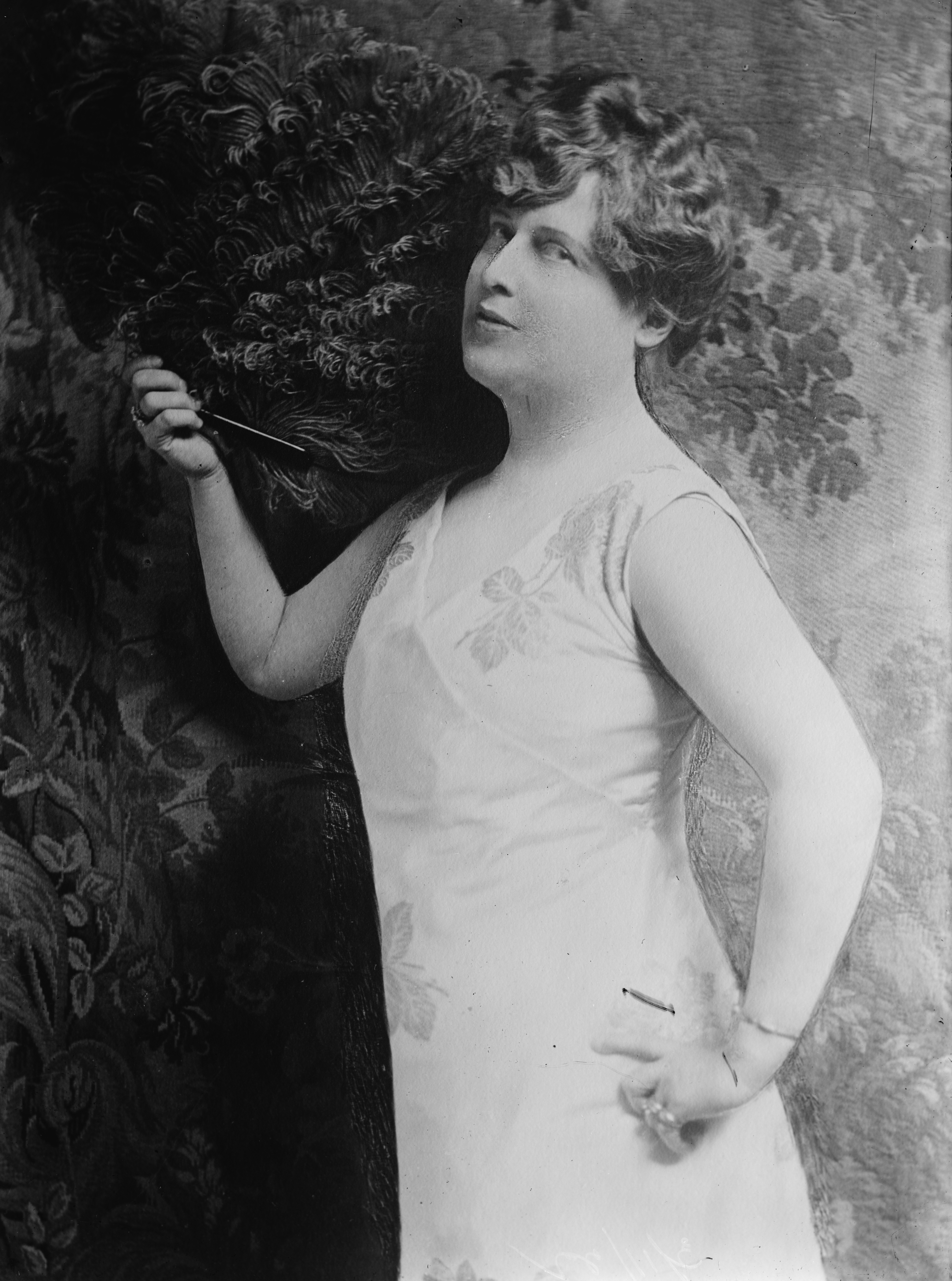 Want to make a complete 180 after basking in the lush, gorgeous voices of last weekend’s La Traviata? This weekend, the Madison Theatre Guild presents Souvenir: A Fantasia on the Life of Florence Foster Jenkins. Jenkins was an American soprano who became famous for her conviction that she was a great singer, despite her obvious lack of talent and basic ability to sing on pitch. Think we’re kidding? Just listen to her take on Mozart’s Queen of the Night aria.

Souvenir, by Stephen Temperley, premiered on Broadway in 2005 and stars local favorites Terry Kiss Frank as Florence Foster Jenkins and Taras Nahirniak as Cosme McMoon. From the press materials: “Souvenir is a heartfelt, wickedly funny look at the limits of self-perception and the unpredictable nature of friendship. The story of real-life Florence Foster Jenkins, a New York socialite and tone-deaf diva who thought she was a great soprano. Unfortunately her great love of music was not matched by her own abilities. Her brilliant, wry accompanist, Cosme McMoon, chronicles Florence’s unlikely rise to cult status, which culminated in an infamous sold-out Carnegie Hall performance in October 1944.”

Performances are May 6-21 at the Evjue Theatre at the Bartell (113 E. Mifflin Street) and tickets start at $15. Betty Diamond directs.

Our newly appointed general director Kathryn Smith won’t officially start until July 1st, but we thought it’d be fun to get to know her a little bit better in the interim. Here are her answers to ten questions we recently sent her way:

Q: Where did you grow up?
A: Seattle

Q: When did you first attend a live opera, and what was it?

A: I think it was either Porgy and Bess at age six or seven, or Rigoletto (in English) at eight or nine.  I remember that the latter bored me.

Q: It’s not fair, but I have to ask:  who are your top 3 favorite composers?
A: Mozart, Schubert, and Cole Porter.

Q: What are your top 3 favorite operas, if you had to choose? This is a desert island scenario.

Q: What is the last book you read that you’d recommend to a friend?
A: I read all of Dorothy Sayer’s Lord Peter Wimsey mysteries this year – a surprising lapse in my education – so I’d recommend any of them.

Q: Can you name one of the highlights from your time at the Met?
A: Just one?  The first time you set foot on the stage is unforgettable, and so is the first time someone cancels an hour before curtain.  Plus I heard so many incredible performances, from Natalie Dessay’s first Met Zerbinetta to Hei-Kyung Hong in just about anything, and Bryn Terfel and Ferruccio Furlanetto playfully negotiating a platform that rose out of the stage an act too early in Don Giovanni.

Q: What are you most proud of achieving at Tacoma Opera?
A: Growing a company that was truly connected to its community, using mostly Northwest-based singers to present operas that a company of our budget size had no business producing, like Le Comte Ory and Faust.

Q: What intrigues you most about moving to the city of Madison?
A: Learning to drive in the snow.

Q: After spending a week with Madison Opera during our rehearsal process for La Traviata, what are you most excited about in joining our company?
A: Every individual I met, whether audience member or stage crew, told me how much Madison Opera meant to them.  Joining a company and a community that cares that deeply is a very exciting prospect, as it means we all want to do great things together.

Thanks, Kathryn – we’re all looking forward to working with you, and perhaps lending some snow-driving tips along the way!