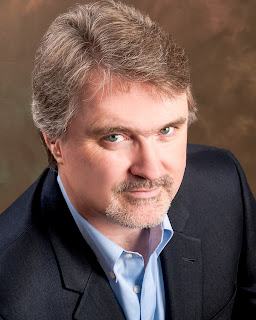 Discovering, through the marriage of text, music, and colleagues, who my characters are, and then letting the audience in on that discovery.
2. The greatest challenge in being a singer is:
Part of me wants to say, “Knowing that you’re only as good as your last performance.” But the truth is, the greatest challenge is to maintain proper balance between one’s professional and personal lives. I have no idea how many of my children’s “major events” I have missed.
3. A live music performance I’ve attended that I will never forget is:
Dwight Yoakam, January 2010 in Atlantic City. Awesome!
4. A few of my favorite films are:
Saving Private Ryan, Monty Python and the Holy Grail, and pretty much anything to do with baseball.
5. Three things I can’t live without are:
Internet, intellectual curiosity, and hugs from my daughters.
6. My number one hobby is:
A while back, I would have said surfing the internet, but I’ve recently discovered writing.
7. If you could perform with any singer, retired or deceased, who would it be?
Giuseppina Strepponi. I’d love to have been able to meet Mrs. Verdi.
8. If you weren’t a singer, what profession would you be in?
I think I’d like to be a sportswriter, specifically a columnist. Either that, or I’d have gone into the family business and become a lawyer. And I adore baseball, but I wasn’t very good at it.
9. What role do you wish you could sing that you could never sing because it’s the wrong voice type/gender?
Méphistophélés in Gounod’s Faust. He’s evil, but not mean… And he has so much FUN!
10. Describe your favorite moment on stage.
Singing the role of Des Grieux in Massenet’s Manon at La Scala.
Bonus: One question you wish someone would ask you (and the answer).
How many pairs of cowboy boots do you own?
Four. 😉
See Bill in Madison Opera’s production of Verdi’s A Masked Ball (Un Ballo in Maschera) October 26 and 28 at Overture Hall. Tickets start at just $18!