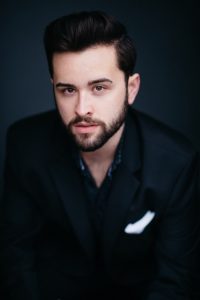 1.  Where were you born / raised?
I was born here in Madison and raised in Plain, Wisconsin.

2.  If you weren’t a singer, what profession would you be in?
I love to debate, so probably a lawyer.  Or, if I were to go with 5-year-old-Josh’s career plan, I would rule the world.  I was pretty ambitious.

3.  My favorite opera is…
La Traviata.  It was the first opera I was ever in, and the music really holds a special place in my heart.  Alfredo is one of those roles on my “dream roles” list.  [Ed note:  Joshua made his debut as Giuseppe in La Traviata at Madison Opera when he was a senior in high school.]

4.  My favorite pre/post-show meal is…
A big steak!

5.  People would be surprised to know that…
I love pretending to be a soprano when I’m home alone…  I’m honestly surprised that none of my neighbors have filed noise complaints.

6.  What is your favorite song to belt out at the bar / in the car / for karaoke?
“And I Am Telling You” from Dreamgirls.  Now THAT’S a belting song!

8.  A few of my favorite films are…
Shoot.  This is a hard one.  I’ll say The Wizard of Oz, Star, and The Rocky Horror Picture Show.

9.  If we were to turn on your ipod right now, what five artists/songs would we see on your recently-played list?
Sweeney Todd (surprise!), The Magic Flute, Porgy and Bess, Nina Simone, and Louis Armstrong.

10.  What is the best costume you’ve ever worn?
Probably my inmate costume from when I was in Dead Man Walking at Madison Opera.  Not only was it a Canadian tuxedo, but all of the fake tattoos were too much fun!

Don’t miss the chance to see Joshua in Sweeney Todd, a thrilling American masterpiece!  Performances are February 6, 7, and 8 in the Capitol Theater.  Tickets start at $25; visit madisonopera.org for more information.