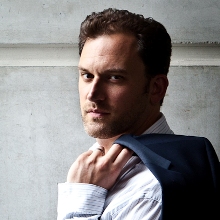 Morgan Smith, baritone
The Villains, The Tales of Hoffmann

1.  Where were you born / raised?
I was raised in White Plains, New York.

2.  If you weren’t a singer, what profession would you be in?
I’d probably be a singer/songwriter, or a marine biologist.

3.  The first opera I was ever in was…
Die Zauberflöte.

4.  My favorite opera is…
Oh… tough one…  Probably Moby-Dick by Jake Heggie.

5.  My favorite pre-show meal is…
Sushi.

6.  People would be surprised to know that…
I used to race open canoes in whitewater slalom competitions.

7.  A few of my favorite books are…
Parenting with Love and Logic, The Odyssey, In the Heart of the Sea.

8.  If we were to turn on your ipod / music listening device right now, what five artists / songs would we see on you recently-played list?
Tim McGraw, Glen Hansard, Brandi Carlyle, Damien Rice, Steve Azar.

9.  What is the worst costume you’ve ever worn?
Probably a fly costume in Klaus Guth’s production of The Barber of Seville.  So cumbersome!  I kept slamming into my poor colleagues with those wings!  And it was a sweat box.

10.  Everyone should see The Tales of Hoffmann because….
It’s unlike any other opera in the repertoire.

Bonus:  One question you wish someone would ask you (and the answer):
Q:  At what moment did you decide to become an opera singer?
A:  While watching a production of The Tales of Hoffmann, opening night at the Metropolitan Opera, 1992, starring Placido Domingo, Carol Vaness, and Samuel Ramey!

Don’t miss the chance to see Morgan in The Tales of Hoffmann, an extraordinary work that is equal parts fantasy, realism, and genuine passion.  Performances are April 15 and 17 in Overture Hall.  Tickets start at $18; visit madisonopera.org for more information.