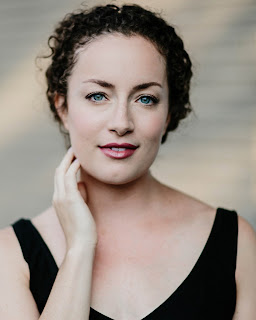 1.  Where were you born / raised?
I was born in South Bend, Indiana.  My family moved down south when I was 7 years old, so most of my growing-up years were spent in the suburban area of Atlanta, Georgia.

2.  If you weren’t a singer, what profession would you be in?
I think I would be really great at professional organizing, or being a personal assistant.  I am very organized, and LOVE being organized!

3.  The first opera I was ever in was…
…a piece that the University of Kentucky Opera Theatre premiered while I was getting my undergraduate degree there.  It was a piece about the early life of Abraham Lincoln and the time he spent in Kentucky.  The opera was called River of Time, composed by Joe Baber.  I sang a small comprimario role.  New works have been at the very start of my opera singing!

4.  My favorite opera is…
Well, I think this answer probably changes for singers ALL the time, but right now I am pretty obsessed with Massenet’s Thais and Britten’s Peter Grimes… Oh, and Eugene Onegin!!

6.  People would be surprised to know that…
…I am a twin!  She and I are fraternal, and although we have completely opposite interests, she is my best friend in the whole world.

7.  A few of my favorite books are…
I’m a huge fan of Brené Brown, so all of her books.  The History of Nearly Everything by Bill Bryson (although I still haven’t quite finished… It is really great!), and the Harry Potter books are always go-to’s.  Also, I just finished a super-interesting book called The Science of Yoga by William Broad.  Would definitely recommend it!

8.  I like to binge-watch…
I recently binge-watched the Netflix series The Crown about the current Queen Elizabeth’s early adult life as Queen of England…  I could not stop watching the episodes!!

9.  What four people (living or deceased) would you like to invite for a dinner party?
Joyce DiDonato, Viola Davis, my late great-aunt Dorothy, who was an opera singer (we never met), and Pope Francis.

10.  Everyone should see Charlie Parker’s Yardbird because….
The music will be buzzing in your ears for days…  When I am working on Charlie Parker’s Yardbird, it is almost impossible to get it out of my head!  Also, the singing of the rest of the cast is outstanding.  Everyone has so much fun doing this opera, and I think that translates back into the audience’s experience.

Bonus:  One question you wish someone would ask you (and the answer):
Q:  What is your all-time favorite food?
A:  BACON.

Don’t miss the chance to see Rachel in Charlie Parker’s Yardbird, the Midwest premiere of this acclaimed new opera about the legendary saxophone player.  Performances are February 10 and 12 in the Capitol Theater.  Tickets start at $25; visit madisonopera.org for more information.