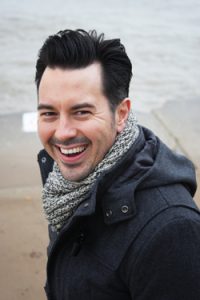 1.  Where were you born?
LOUISVILLE, KY Where were you raised? MARION, KY
2.  If you weren’t a singer, what profession would you be in?
I’d probably pursue acting – I think I’m more naturally prone to acting anyway. I’d love to write and perform sketch comedy and branch into podcasting as well.
3.  The first opera I was ever in was…
La Bohème, playing Schaunard.
4.  My favorite opera is…
Rigoletto; come to think of it, RE: #2, I’d probably be a Duke
5.  My favorite food to cook or eat is…
Filet mignon – and my own is hard to beat, especially if my accompanying sauce choron turns out… yeah, if I wasn’t a singer, I’d probably be a chef
6.  People would be surprised to know…
I was a couple signed documents away from joining the US Army and being trained as a linguist when I got a call in July that the voice faculty at the Cincinnati College Conservatory of Music was interested in hearing me for their Artist Diploma in Opera program. Sang for them, got accepted last minute, never joined the Army. So… maybe #2 is translator for the State Department?
7.  If I could travel anywhere, real or fantasy, I would travel to…
The past!!! Can I change #2 to time traveller?
8.  I like to binge-watch…
So, so many things. My favorite thing to binge watch is something difficult to decipher that my wife and I enjoy together, and can then talk about and attempt to figure out.
9.  What four people (living or deceased) would you like to invite for a dinner party?
Oh boy… Mozart, Socrates, Shakespeare, King Solomon
10.  Everyone should see Carmen because….
It was a flop in Bizet’s lifetime, and yet has become one of the single most-performed pieces in the operatic repertoire. Several of the tunes are completely entrenched in the ear of the culture. There is much material to explore and unpack regarding libertine and bipolar personalities, and what happens when they collide. Also, about #2 – BULL FIGHTER!!!
11. Bonus: One question you wish someone would ask you (and the answer).
Q: What’s your biggest pet peeve?
A: People who bang on about their pet peeves.
Don’t miss the chance to see Corey in Carmen, Bizet’s breathtaking opera. Performances are November 3 & November 5 in Overture Hall.  Tickets start at $18; visit madisonopera.org for more information.

0 comments on “10 Questions with Corey Crider”