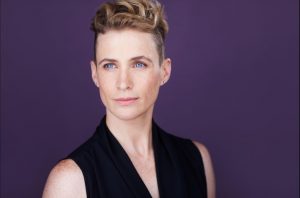 Alison Moritz
Stage Director,
The Abduction from the Seraglio
1.  Where were you born and raised?
St. Louis, MO.
2.  If you weren’t a stage director, what profession would you be in?
I’ve always been intrigued by the idea of being a story editor or script consultant for television. I think it would challenge my imagination and empathy in a lot of the same ways directing operas does.
3.  The first opera I was ever in was…
The Thunder of Horses, a children’s opera by Cary John Franklin, at Opera Theatre of St. Louis. I vividly remember playing a scared squirrel in one scene (I was nine years old).
4.  My favorite opera is…
It’s hard to nail down just one, but Peter Grimes and The Rake’s Progressare pretty high on my list! I’m also a sucker for Puccini’s La Fanciulla del West, and I’m itching to do my own production soon.
5.  My favorite food to cook…
…anything breakfast related! Last summer, there was a period when Anshuman Bhatia (scenic and lighting designer for Abduction) and I were having a series of morning meetings. Every time he called, I was just taking a frittata out of the oven! He says I owe him a frittata now. 🙂 I’m definitely more of a cook than a baker – my former roommates can all attest to some pretty “creative” baking disasters in my past.
6.  People would be surprised to know…
I’m an avid fan of the New York Times crossword. I’ve been doing it on and off since 2006, and Fridays are my favorite puzzles.
7.  If I could travel anywhere, real or fantasy, I would travel to…
I’m a big fan of museums, and I’ve never been to the Hermitage in St. Petersburg, so I think a cultural tour of Russia would be pretty amazing. I’m also increasingly curious about non-Western forms of theatre and music, which will likely inspire a lot of travel in my future!
8.  I like to binge-watch…
Twin Peaks, The Wire, The West Wing, Broad City, and The Great British Bake-Off.
9.  What four people would you like to invite for a dinner party?
Oh gosh! This one is hard – I’d honestly probably choose four of my close friends from grad school, because we don’t get to see each other enough. One of the perks of being in this business is that you are constantly making new friends, but nothing beats reconnecting with the people who know you best.
10.  Everyone should see The Abduction from the Seraglio because….
In my opinion, the best reason to see a new production of The Abduction from the Seraglio is to feature an ensemble cast of wonderful singing actors. And, yes, we will absolutely have some fantastic talent in Madison!
11.  Bonus: One question you wish someone would ask you.

Oh, let me turn this around for our Madison friends:  what are the not-to-be-missed places in Madison? Recommendations for coffee, cocktails, and culture appreciated! 🙂 Thanks!

Don’t miss the chance to see Alison’s production of The Abduction from the Seraglio, Mozart’s first major success. Performances are February 9 & February 11 in Capitol Theater.  Tickets start at $25; visit madisonopera.org for more information.

0 comments on “10 Questions with Alison Moritz”