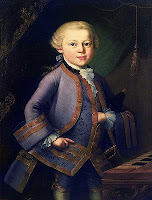 Okay, maybe the Cosi posts are a bit preemptive, as performances are still two months away. But it’s winter, in Wisconsin, and well, this music warms the soul and Mozart is just good fun.

For anyone interested in getting a sense of the “real” Mozart, I recommend perusing his letters. They are endlessly funny and touching. Surprisingly, they often reveal a picture of the man very similar to the churlish, goofy, playful character portrayed in the play/movie Amadeus. But they also display a seriousness and religiosity that gets lost in the popular perception of the boy genius. I’ll likely post more on this in the future, but here are some examples just from a quick scan of letters sent during his Italian tour in 1769-70, when he was in his early teens:

To his sister, from Worgl, December 1769 (13 years old):
“The prima Dona is tolerable, but I think she is as old as the hills, sings less well than she acts and is the wife of a violinist at the opera called Masi…Ballerino primo, good; ballerina prima, good but a monstrous scarecrow.”

To his sister, from Rome, April 21, 1770:
“Pray you will look out the arithmetic tables, for you wrote them out yourself, and I have lost them and so have quite forgotten them.”

To his sister, from Naples, June 5, 1770:
“Naples and Rome are two sleepy cities. Beautiful writing, isn’t it? Write to me and don’t be so lazy. Otherwise you will get some whackings from me!
….The opera here is by Jomelli; it is beautiful, but too discreet and old fashioned for the theater…The dances are wretchedly pompous. The theatre is handsome. The King is a rough Neapolitan in manners and always stands on a stool at the opera to appear a little taller than the Queen…”

To his mother, from Bologna, September 29, 1770:
“I am grieved indeed at this prolonged illness of poor Miss Martha’s which she is forced to endure with patience. I hope with God’s help she will soon get well again, but if not, one must not grieve too much, for God’s will is always best and God doubtless knows best whether it is better to be in this world or in the other. But she must take heart now that the rain is over and the fine weather is come.”

To his mother, from Milan, Oct. 20, 1770:
“I can write but little, for much recitative writing has made my fingers very painful. I beg Mama pray that my opera* may go well and that we may then be happily reunited.”
*Opera referred to is Mitridate, re di Ponto.

0 comments on “The real Mozart”