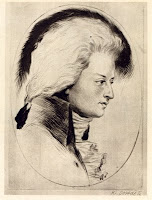 Expanding on an earlier post, here are more excerpts from Mozart’s letters:

To his Father, Leopold Mozart, April 1784
Herr Richter, a clavier-player, is making a tour on his way back to Holland, his native country…There is a great deal of execution in his playing, but, as you will hear, it is too broad, too laboured, and without a trace of taste or feeling. Otherwise, he is the best fellow in the world and without a trace of pride. He fixed his eyes on my fingers while I played to him, then said suddenly, “My God; I work at it till I sweat and yet get no success–while you, my friend, simply play at it!” “Yes,” said I, “but I too had to work in order that I might be exempt from work now.”

To his Wife, Constance Weber, Apri 1789
Dearest little wife, if only I had a letter from you! If I were to tell you all the things I do with your dear portrait you would often laugh, I think! For instance, when I take it out of its case, I say, “Good morrow, Stanzerl! Good day, little rogue!–pussy-wussy! saucy one!–good for nothing!–dainty morsel!” And when I put it back I slip it in little by little saying all the time, “Nu-nu-nu-nu!” with just the peculiar emphasis this very meaningful word demands, and then, just at the last, quickly, “Good night, little pet–sleep sound!”

To his Friend, Michael Puchberg, June 1790
I am here to conduct my opera [Cosi fan Tutte]. My wife is getting a little better. She already feels some slight relief, but she will have to take the baths sixty times–and go away again in the autumn. God grant it may do her good!–Dearest friend, if you can help with the present pressing expenses, oh do so! I am staying in Baden for the sake of economy, and only go into town when absolutely necessary. I have just been obliged to part with my quartets (that difficult work!) for a mere song, so as to get ready money.–I am now working at some clavier sonatas for the same reason. Adjeu. Send me what you can most easily spare.

To his wife, October 1791
I am just returned from the opera [The Magic Flute]. It was quite as full as ever. The duetto, “Man and Wife,” etc., and the glockenspiel in Act I were encored as usual–the boy terzett in Act II in addition. But it is the evident quiet approbation which best pleases me! It is apparent that this opera is rising rapidly and steadily in estimation.

Here we learn what Mozart looked for in a clavier player, and what distinguished his own playing in the eyes of his peers: his effortlessness. We see a completely goofy and yet tender note to his wife Constance, a common mixture in his comedies. At the time Cosi fan Tutte was premiered, we learn that his wife was ill and money was tight, which forced him to beg from friends and most depressingly forced him to put down meaningful work in order to write “mere songs” for fast money. Lastly, we hear of the triumphant reception The Magic Flute was receiving, and that it was the audience’s silence (something uncommon in that era) that he most valued as a sign of success.

Mozart was always cocky, but one senses that with The Magic Flute he was beginning to take his gifts more seriously, to realize the consequences and possibilities of his greatness. But it was just two months after he wrote of that opera’s “steady rising in estimation” that he died at age 35:

Mozart died on 5 December, 1791. There was not money enough for fitting obsequies. He was buried in the “common grave.” Few friends followed the coffin, and even these turned back half-way on account of the bad weather. It is now impossible to identify with any certainty the spot where rest his mortal remains. (Hans Mersmann) 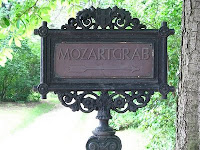 A memorial stands today in St. Marx Cemetery in Vienna, where Mozart was buried. I was in Vienna four years ago and went on a small pilgrimage of sorts to St. Marx. It was a freezing, blustery, cloudy day, and I had gotten off at the wrong tram stop so found myself walking well over a mile in search of the cemetery. There were practically no signs, no shops selling Mozart souvenirs or anything else to indicate the historic location amongst the columns of modest apartment buildings in the neighborhood. And the cemetery itself–overgrown and dead in winter–was empty, with no other tourists in sight. In essence, despite the new monument to Mozart at St. Marx, it felt rather insignificant, casual, an afterthought, like the paupers’ grave it was on the rainy day Mozart was buried.

The reality is that Mozart likely had his best years ahead of him. He lived, loved, and worked passionately during his short life to all of our benefit, but it had not yet brought him the creative freedom of a steady, well-paying post. In an appeal for financial assistance that his wife wrote to Emperor Leopold II six days after his passing, she says, “The picture becomes all the more pathetic in that he was taken from the world at the very moment when his prospects for the future were brightening upon all sides.” We are only left to wonder what could have been, grateful for what we have.