It was a busy weekend for Madison Opera. Saturday, the Faust set was loaded in to Overture Hall during Overture’s Open House. Meanwhile, the orchestra and singers got together for the first time at the sitzprobe rehearsal upstairs. On Sunday, David Pittsinger, David Lomeli, Jill Gardner, Director Bernard Uzan, and Maestro Laurent Campellone all joined Allan Naplan at Opera Up Close: The Faust Preview before their first rehearsal on stage. 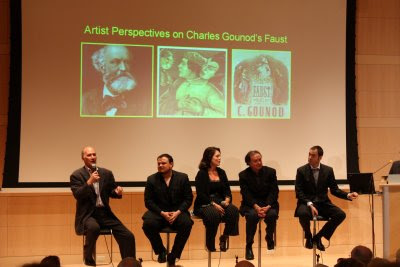 In addition to loads of musical and historical details presented by Naplan at Opera Up Close, we learned of Maestro Campellone’s first experience with Faust. He was 6 years old, and his Italian grandfather felt it was time for young Laurent’s first opera, so they went to Faust. After Mephistopheles’s entrance, however, 6 year-old Laurent was scared out of his mind and “went crazy.” He said (sarcastically) that it was his grandfather’s “greatest shame” to have to leave the theater early. We also learned that our tenor David Lomeli started off as football player and engineering student in Mexico. After the athletic department at his university could only offer a half-scholarship, he heard that the cultural department was offering more money and so auditioned for West Side Story. Though he had the voice, the director was unfortunately not looking for a football player-sized Tony, but as fate would have it, a new opera department was in the works and David was offered the scholarship for a tenor. So, as he said, he gave up the sports life and became an opera singer for the money.

Could you put the Opera Up Close out on You Tube?