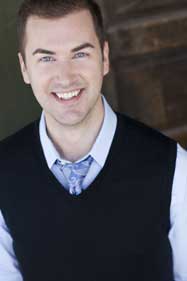 1. My favorite thing about being a singer is:
Making art within a genre that has no “delete button”; once you sing and put that sound out into the world, there is no way of taking it back. It’s very exciting.
2. The greatest challenge in being a singer is:
Convincing friends, family, or complete strangers that opera is beautiful, relevant, and entertaining and not just an elite novelty.
3. A live music performance I’ve attended that I will never forget is:
Chicago Symphony Orchestra’s performance of Verdi’s Otello at Carnegie Hall. The combination of artistic forces, acoustics, and excitement those on stage and in the audience created this indescribable energy; everybody knew they were part of something special.
4. A few of my favorite films are:
Clue, V for Vendetta, Baz Luhrmann’s Romeo and Juliet, Soap Dish.
5. Three things I can’t live without are:
Coffee, a good pillow, and cheese.
6. My number one hobby is:
Cooking – nearly any kind of cuisine.
7. If you could perform with any singer, retired or deceased, who would it be?
Birgit Nilsson – though I don’t think anybody would hear me singing with her!
8. If you weren’t a singer, what profession would you be in?
If not for my voice teacher in high school threatening to drop me as a student if I didn’t pursue music, I would have gone to study architecture.
9. What role do you wish you could sing that you could never sing because it’s the wrong voice type/gender?
Lucia – or basically anything with a mad scene. (Maybe at some point I’ll get to do a Peter Grimes and go thoroughly crazy!)
10. Describe your favorite moment on stage.

My most memorable moment on stage was during a performance in graduate school of Ned Rorem’s Three Sisters Who Are Not Sisters (such a bizarre show!). For our staging, Samuel got shot in the middle of his aria and spent the rest of the time “opera dying.” At the end, when I finally slumped over of a very intense performance, there was a moment of complete silence on stage and in the audience- until my 3-year-old niece said to my sister, “Oh no! Did he die?” We had a really difficult time moving on with our macabre quintet of “dead characters” without laughing.

Bonus: One question you wish someone would ask you (and the answer).
What book or movie should be made into an opera?
Clue! Of course, Wadsworth would be a lyric tenor. Yvette and Miss Scarlet would be Mezzos; Mrs. Peacock and Mrs. White, sopranos; Professor Plum, a countertenor; Colonel Mustard, a Baritone; and Mr. Body and Mr. Green, basses. Just think of the possibilities for arias and ensembles! During intermission, the audience could vote on what ending for that night…. Brilliant.