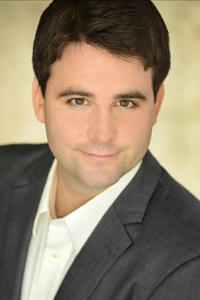 
1.  Where were you born / raised?
I was born and raised in Janesville, Iowa.

2.  If you weren’t a singer, what profession would you be in?
Well, my dad runs a small construction company, so maybe I would do that.  I enjoyed working in restaurants when I was in college, so maybe I would try opening my own place called “Karla’s Kitchen,” a restaurant filled with delicious food made from the recipes of my mother Karla. 🙂  Then again, maybe I would just move out to the mountains and live off the land; that could be exciting.

3.  The first opera I was ever in was…
My first opera experience occurred at the University of Northern Iowa during the sophomore year of my undergraduate degree.  I was so green at that time, I didn’t even have an aria to audition with.  I ended up singing the role of the scribe, Ezekiel Cheever, in The Crucible.  Word has it I sang a killer “hear ye!  hear ye!”

4.  My favorite opera is…
Oddly enough, I would have to say my favorite opera is La Bohème.  It’s very easy for me to relate to the good and bad times of being a struggling artist, and Puccini makes that so accessible for all to see and feel.  And the tragic love story doesn’t hurt either.

5.  My favorite pre/post-show meal is…
I’ve done a lot of experimenting with pre-show meals, and I’ve found that a nice piece of chicken with some rice and broccoli or something like that (bland and boring) is best.  That usually gives me enough energy without affecting my voice negatively.  I’ll usually have an apple in between acts, and then once the show’s over, bring on the hot wings!  Or pizza, I love pizza too… or some ribs maybe, or a big juicy burger!  Actually, I just love all food.

I alluded to it earlier, but I was a little late to the opera party.  It wasn’t until college that I started taking an interest in it.  I’ve always been involved with music, but when I was in high school, sports actually took up most of my free time.  I was an all-conference point guard on my basketball team and at one point I could dunk a basketball!  Sadly, that small window of time where I could slam dunk a basketball has long been closed….

7.  A few of my favorite books are…
I think anyone my age has to include the Harry Potter books as some of their favorites.  I remember making my mom take me to Walmart the day of the release of the new book so I could stay up all night reading it.  Nowadays I enjoy reading crime fiction novels.

8.  If we were to turn on your ipod right now, what five artists/songs would we see on your recently-played list?

I would have to guess that you would find the Red Hot Chili Peppers, The Beatles, Bob Marley, Luciano Pavarotti, and maybe Neil Young.  My girlfriend and I recently listened to a Neil Young concert and discovered that Neil and I have very similar speaking voices….  It’s made me think about adding “Harvest Moon” to my audition rep. 🙂

9.  What is the worst costume you’ve ever worn? Or if no such costume, what was the best costume?

I’m going to take the Fifth on the worst costume, but the best costume I’ve ever worn would have to be the two costumes I wore in our production of Così fan tutte at the Academy of Vocal Arts.  It was an updated production set in the 1960s.  We were Marines in the beginning and returned later in the show disguised as hippies.  It was amazing to have such a great contrast and for both of them to be so striking!  We had very legitimate Marine uniforms and the hippy costumes were just amazing, fully-equipped with wigs, beards, tattered jeans, leather sandals, pink glasses, and Dashiki shirts.

It’s so easy to find a little bit of yourself in all of the characters.  We’ve all had moments in life where we are struggling to get by.  It’s very important in those times to have great friends to help you find a way through.  Some of my best memories are when I had almost nothing to my name.  I think many people will remember those times when they see this opera.  And they’ll remember their first loves and the passion both in love and hate that fuel those relationships.  The music gives such a clear vision to the stories of these characters.  It will greatly affect you if you give it a chance.

Bonus:  One question you wish someone would ask you (and the answer):

Q:  What are you watching on Netflix?
A:  The best thing I’ve recently finished was Lost, but currently I’m slowly making my way through Lawrence of Arabia.

Don’t miss the chance to see Mack in La Bohème, one of the greatest operas of all time!  Performances are November 13 and 15 in Overture Hall.  Tickets start at $18; visit madisonopera.org for more information.