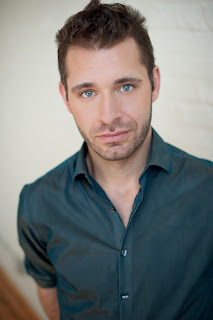 1.  Where were you born / raised?
I was born on the northwest side of Chicago in a very residential neighborhood.

2.  If you weren’t a singer, what profession would you be in?
I’ve always wanted to be a TV news anchor or to host a morning show on the radio.  I love WGN and the morning talk radio show in Chicago – in fact, I listen to the podcasts every day no matter where I may be in the world.

3.  The first opera I was ever in was…
The Tales of Hoffmann!  It was my first opera during my freshman year of college.  It solidified for me that being a performer was the path I wanted to choose.

4.  My favorite opera is…
Eugene Onegin.  I sing the role of Prince Gremin, which is one of those roles that appear at the very end of the opera.  He gets to sing a beautiful, lyric aria.  He actually “wins” in the opera, but the meatier character for me is the title character of Onegin.  Sometimes, I’ll just go through Youtube and watch various scenes with different singers and stagings of the pivotal scenes to dream about singing the role.

5.  My favorite pre/post-show meal is…
I eat pretty normally ever day, but after show, I’d have to go with a burger and fries.  In Madison, I’ll go with cheese curds or poutine and a beer (after the show, of course).

6.  People would be surprised to know that…
I’m a pretty good student.  I took most assignments in school pretty seriously.  I will say, though, that there are a couple of subjects I just have an insane amount of trouble comprehending.  I got mostly As and Bs in high school and college, but I had to switch out of Geometry, because I could never get a grasp on the concept of “proofs.”  Go figure.

7.  A few of my favorite books are…
The Hunger Games trilogy, My Horizontal Life by Chelsea Handler, Moby Dick.

8.  If we were to turn on your ipod right now, what five artists / songs would we see on you recently-played list?
1) 5 recordings of The Tales of Hoffmann
2) 3 recordings of me talking to myself (to memorize scripts for commercials, tv, etc.)
3) 90s energy pop music (for the gym)
4) The Broadway Channel on Spotify (think Legally Blonde, Newsies)
5) Downtown (Macklemore)

9.  What is the worst costume you’ve ever worn?  Or if no such costume, what was the best costume?
I can’t think of a really horrible costume.  I’ve been pretty lucky with that.  I had a custom-made beautiful Don Carlo costume as one of the deputies at Opernahaus Zurich.  It was tailored exactly to my figure for the premiere, and I think it’s cool that my name will always be inside the costume for the future singers who wear it.

10.  Everyone should see The Tales of Hoffmann because….
It is a look through love gained and lost.  It is a story that many people can connect to while looking back at parts of life gone by.  There are tragic and comedic elements, and the music is just insanely beautiful.  You will probably never hear the same exact version of Hoffmann at two separate locations, as the score has so many incarnations.  You will see a doll come to life and get to witness magic through staging and vocalism.

Bonus:  One question you wish someone would ask you (and the answer):
Q:  How did you know you wanted to be a performer / actor / singer?
A:  My parents took me to a PG-13 movie when I was about 10 years old, and I asked them what would make it different from the PG movies that I was used to seeing.  They said there might be swearing and kissing in the movie and that it was okay, because it was make-believe.  From this point onwards, I wanted to be an actor.

Don’t miss the chance to see Thomas in The Tales of Hoffmann, an extraordinary work that is equal parts fantasy, realism, and genuine passion.  Performances are April 15 and 17 in Overture Hall.  Tickets start at $18; visit madisonopera.org for more information.