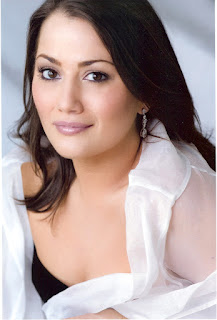 1.  Where were you born / raised?
I was born in Minneapolis, Minnesota and raised in White Bear Lake, Minnesota.  Go Bears!

2.  If you weren’t a singer, what profession would you be in?
Gosh, this is difficult, because I have several different interests, but probably at the top of the list would be a teacher.  I have done a tremendous amount of teaching artist work throughout my career and really miss working with kids.  They truly are my favorite audience.  I also happen to be the daughter of two music educators!

4.  My favorite opera is…
…oooh, that’s a toughy!  I never get sick of Madama Butterfly or Carmen (two of my favorite roles to sing are Suzuki and Carmen).  But two of my favorite productions that I’ve been a part of are The Long Walk, a world premiere I did this summer at Opera Saratoga, and Lizzie Borden at Boston Lyric Opera.  The Long Walk was thrilling, as I was part of the birth of an opera, so to speak…  I love working with living composers.  It didn’t hurt that the role was written specifically for me, which is such a luxury!  Lizzie Borden was one of the most difficult pieces I’ve done both dramatically and musically (next to Jo, that is), but boy was it rewarding and fun to play a crazy lady.….

5.  My favorite pre/post-show meal is…
Pre:  Something bland.  Let’s just say I don’t want to be reminded of what I ate while on stage.
Post:  Glass of wine… or two… or possibly even a Manhattan and a burger.

6.  People would be surprised to know that…
1.  I was basically asked to stop playing in 8th grade band because I was so terrible at the oboe.  In my defense, I was already studying piano and violin, so it was my third instrument.  I sounded like a sick duck!
2.  Even though I’ve lived in New York for almost 20 years, I’ll always be a Minnesota girl at heart.
3.  My Norwegian is pretty darn good.
4.  I fulfilled a dream of mine three years ago and was on A Prairie Home Companion.
5.  I have a nearly 2-year-old son.

7.  My favorite book to read growing up was…
Charlotte’s Web and The Pet of the Met.

8.  If we were to turn on your ipod right now, what five artists / songs would we see on you recently-played list?
1.  LITTLE WOMEN!
2.  Pharrell Williams – Happy
3.  Anne Sofie von Otter singing the “Laudamus Te” from Mozart’s Mass in C minor.  My son loves to dance and “sing” along!
4.  Swedish children’s songs.
5.  The study midi for Mark Adamo’s Becoming Santa Claus, which I just finished in Dallas.

9.  What is the worst costume you’ve ever worn?
Hands down the worst costume I’ve ever worn was as the Page in Salome.  Uff-da, it was not flattering!  A close second was as a Flower Maiden in Parsifal at the Met.  While it was an incredible production of which I’m so proud to have been a part, I didn’t love the white nightie I had to wear.

10.  Everyone should see Little Women because….
It is a beautiful, human story.  We can all relate to wanting to hold onto the past and resist change, and yet know that we must let go and move on.  It speaks to the richness of family and sisterhood in such a touching way.  It has quickly become a classic in the canon of American opera.

Don’t miss the chance to see Heather in Little Women, as this beloved American classic comes to vivid musical life!  Performances are February 5 and 7 in the Capitol Theater.  Tickets start at $25; visit madisonopera.org for more information.