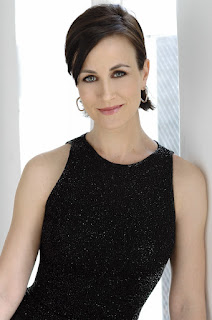 Adriana Zabala, mezzo
Nicklausse / The Muse
in The Tales of Hoffmann

1.  Where were you born / raised?
I was born in Georgia and raised in Miami, Caracas, and Houston.

2.  If you weren’t a singer, what profession would you be in?
Art history, film directing, art direction, diplomacy (Foreign Service).

3.  The first opera I was ever in was…
Gianni Schicchi!

4.  My favorite opera is…
The Marriage of Figaro.

6.  People would be surprised to know…
…that baseball is integral to my family history.  My grandfather was a left-handed pitcher from Cuba who played for the New York Giants in the 1940s.

7.  A few of my favorite books are…
There is not enough room!  East of Eden, The Goldfinch, The Magic Mountain, The Complete Works of Shakespeare.

8.  If we were to turn on your ipod right now, what five artists / songs would we see on you recently-played list?
Hamilton original cast album
Kendrick Lamar
Benjamin Clementine
Mitsuko Uchida
And pretty much more Hamilton

9.  What is the worst costume you’ve ever worn?  Or if no such costume, what was the best costume?
Well, “wore” one that was basically my birthday suit – very well done, but felt pretty darn brave.

10.  Everyone should see The Tales of Hoffmann because….
It’s sumptuous!  Clever, sexy, romantic, imaginative, vulnerable, and the music is one amazing piece after another – and it’s FRENCH!  C’est si belle!

Bonus:  One question you wish someone would ask you (and the answer):
Q:  Among so many, what’s your favorite role?
A:  My first love is Cherubino, but the razor thin second is the mercurial, metrosexual, empathetic, smart-ass, loyal, all-gendered, romantic, and emotionally wise Nicklausse.  Love. Him.

Don’t miss the chance to see Adriana in The Tales of Hoffmann, an extraordinary work that is equal parts fantasy, realism, and genuine passion.  Performances are April 15 and 17 in Overture Hall.  Tickets start at $18; visit madisonopera.org for more information.