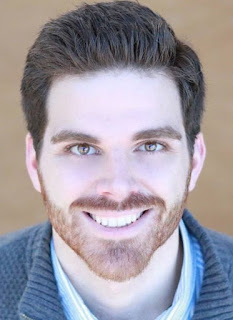 1.  Where were you born / raised?
I was born and raised in Irvine, California

2.  If you weren’t a singer, what profession would you be in?
This is a little embarrassing, but if I were not a singer, I think I would I want to be a video game journalist.  If not that, I would want to be a teacher.

3.  The first opera I was ever in was…
Leonard Bernstein’s Candide.  I played the Baron as well as the Governor and had to sing a B-flat!

4.  My favorite opera is…
If I had to choose one opera, I think it would have to be Verdi’s Rigoletto.  This is partly because, as a baritone, I love Rigoletto’s music.

6.  People would be surprised to know that…
I am currently completing my doctorate at the University of Cincinnati College-Conservatory of Music.

7.  A few of my favorite books are…
The Martian by Andy Weir, Beatrice and Virgil by Yann Martel, and Fight Club by Chuck Palahniuk.

8.  If we were to turn on your ipod / music listening device right now, what five artists / songs would we see on you recently-played list?
Bach’s St. John Passion, Steven Mark Kohn’s American Folk Song Set; Finzi’s Let Us Garlands Bring; Stephen Paulus’ Bittersuite; and Coldplay’s A Head Full of Dreams.  Basically, everything that I am preparing plus the music I sleep to!

9.  What is the worst costume you’ve ever worn?
I wouldn’t call it the worst, but it was not the most flattering.  I wore a bright salmon suit for a production that I was in recently.  The costume designer was extremely proud of the piece.  I didn’t have the heart to tell them that I didn’t really like it.

10.  Everyone should see The Tales of Hoffmann because….
It is a truly unique and exciting piece of theatre that is filled with amazing musical moments.

Bonus:  One question you wish someone would ask you (and the answer):
Q:  How did you get started in singing?
A:  I initially played violin when I was in elementary school, but I would repeatedly lose my violin, so the following year my mother said, “You are going to be in the choir.  That way you would never forget your voice.”  The rest is history.

Don’t miss the chance to see Tyler in The Tales of Hoffmann, an extraordinary work that is equal parts fantasy, realism, and genuine passion.  Performances are April 15 and 17 in Overture Hall.  Tickets start at $18; visit madisonopera.org for more information.