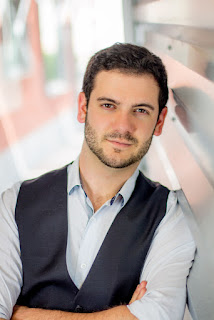 1.  Where were you born / raised?
Born in Tom’s River, New Jersey and raised (mostly) in Quasqueton, Iowa.

2.  If you weren’t a singer, what profession would you be in?
Every singer I know has asked themselves this question, and so far I don’t have the clearest answer.  Coffee is a big passion of mine, so I suppose I could always try to open a coffee shop!

3.  The first opera I was ever in was…
I was a super in Gianni Schicchi my first semester of college; the next semester was my first singing role as Sid in Albert Herring.

4.  My favorite opera is…
Always changing.  There are some I love because of a production I was in and some I have never seen.  Let’s go easy and say top five, in no particular order:  La Bohème, Eugene Onegin, Pélleas et Mélisande, The Tales of Hoffmann, Macbeth.

5.  My favorite pre-show meal is…
I will forever swear by the magic of a spicy falafel sandwich before a big sing.

6.  People would be surprised to know that…
I grew up on a horse farm and rode for most of my childhood, thanks to my very dedicated mother.  Also, I started college as a jazz saxophonist.

7.  A few of my favorite books are…
The Lord of the Rings and The Hobbit (Tolkein); Hard Boiled Wonderful and The End of the World (Murakami); Ender’s Game (Card); The Telling Room (Paterniti); and The Rest is Noise (Ross).

8.  What do you like to binge-watch?
Every Star Trek show made.  I’m currently re-watching DS9.

9.  What four people (living or deceased) would you like to invite for a dinner party?
I guess I’ve always wanted to see what Mozart thought of jazz, so Mozart and Coltrane?  Anthony Bourdain would have to come to show us where to eat, then round it off with Patrick Stewart, maybe?

10.  Everyone should see Romeo and Juliet because….
It’s a moving retelling of this story.  The play itself is aided so well by Gounod’s music and his pacing.  It’s just simply a classic tale told in a way that you won’t see anywhere else.

Bonus:  One question you wish someone would ask you (and the answer):
Q:  Would you like fries with that?
A:  YES, I WOULD!

Don’t miss the chance to see Chris in Romeo and Juliet, as Shakespeare’s classic work comes to ravishing operatic life.  Performances are November 4 and 6 in Overture Hall.  Tickets start at $18; visit madisonopera.org for more information.