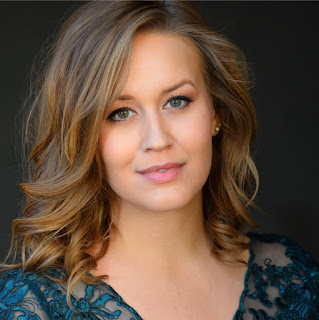 1. Where were you born/ where were you raised?
I was born in Everett, Washington and raised on Kodiak Island, Alaska since I was 9 months old.

2. If you weren’t a vocalist, what profession would you be in?
Speech pathologist.

3. The first opera I was ever in was…
Carmen.

4. My favorite opera is…
Peter Grimes.

5. My favorite pre/post show meal is…
Pre-show is always something light, like a salad with lots of fruits and vegetables. Post-show is when I pig out, usually with a burger.

6. People would be surprised to know…
That despite being from Alaska I did not grow up without electricity, ride polar bears to school, or live in an igloo.

7. I like to binge-watch…
The Office, New Girl, Law and Order.

8. What four people would you like to invite for a dinner party?
My Grandma Thompson, Eleanor Roosevelt, Alma Mahler, and Oscar Wilde.

9. What is the worst costume you’ve ever worn?
That was when I had to play a nun, but it had a steampunk theme. I was covered from head to toe in tons of black fabric (so it was hot under the stage lights) with one strip of white around my face. All of my make-up would rub off on to it. It was gross.

10. Why should people go to the opera?
Because it’s fun!  It’s not as far out of reach as people generally think. There’s an opera out there for every person and their interests.

11. Bonus: What’s one question you wish someone would ask you (and the answer)?
Q: Do you like summer?
A: No, I’m from Alaska! I love winter!