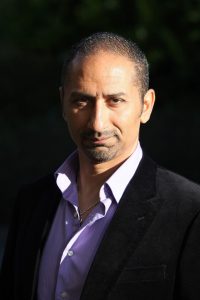 1.  Where were you born and raised?
Cairo, Egypt – born and raised until I was 25 and came to the US to study singing.
2.  If you weren’t a singer, what profession would you be in?
Truck driver, playing opera full-blast.
3.  The first opera I was ever in was…
Le nozze di Figaro in Arabic translation at the Cairo Opera House, March 10, 1988. I performed Bartolo and Antonio.

4.  My favorite opera is…
…Verdi’s Falstaff.
5.  My favorite food to cook or eat is…
I love cooking Thanksgiving food, all of it. Also, fixing Egyptian fava beans in about a dozen ways.
6.  People would be surprised to know…
I’m the Arabic dubbing voice of Mickey Mouse, Ursula in The Little Mermaid, Louis in The Princess and the Frog, and Slim in A Bug’s Life.
7.  If I could cruise down any river in the world, it would be …
… the Danube, with a huge stash of Riesling.
8.  I like to binge-watch…
The West Wing, Grey’s Anatomy, Friends, Will and Grace, House of Cards, Grace and Frankie, and most recently The Marvelous Mrs. Maisel.
9.  What four people would you like to invite for a dinner party?
Verdi, President Obama, Armistead Maupin, and Aaron Sorkin.
10.  Everyone should see Florencia en el Amazonas because….
It has an amazing cast singing luscious music that sounds like how Puccini’s would have evolved had he lived till now. All of this is matched by a visually scrumptious production.

11. Bonus: One question you wish someone would ask you (and the answer).
Q: What’s your secret guilty pleasure?
A: Watching and practicing belly dancing.
Don’t miss the chance to see Ashraf in the Madison Opera premiere of the beautiful Florencia en el Amazonas. Performances are April 27 & April 29 in Overture Hall.  Tickets start at $18; visit madisonopera.org for more information.

0 comments on “10 Questions with Ashraf Sewailam”