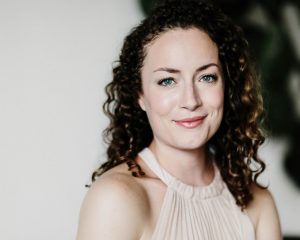 1.  Where were you born and raised?
I was born in South Bend, Indiana, but I was raised in a small town an hour east of Atlanta, Georgia called MADISON!
2.  If you weren’t a singer, what profession would you be in?
I think I would make a really good professional organizer! I take great care and pride in being really organized and neat.
3.  The first opera I was ever in was…
In college there was a professor who was also a composer, and he wrote an opera about Abraham Lincoln that our college of music performed. I sang one of the townswomen!

4.  My favorite opera is…
Right now (because it changes all the time), it is Massenet’s Cendrillon (the duets with Cinderella and the Prince are breathtaking), and Tchaikovsky’s Eugene Onegin. I would be remiss if I didn’t name my all-time favorite Mozart though: Le Nozze di Figaro.

5.  My favorite food to cook or eat is…
Tacos!
6.  People would be surprised to know…
I am a twin (and she is not an opera singer).
7.  If I could cruise down any river in the world, it would be …
…the Rhine! That area is where the Sterrenberg lineage hails from.
8.  I like to binge-watch…

9.  What four people would you like to invite for a dinner party?
Joyce DiDonato, Brene Brown, Barbara Hannigan, and Hoda Kotb and Kathy Lee Gifford.

10.  Everyone should see Florencia en el Amazonas because….
The music is breathtaking, and there are characters in the opera that I think everyone can relate to a little bit. It is a very beautiful and magical story!

11. Bonus: One question you wish someone would ask you (and the answer).
Q:  Do you have any pets?
A:  Yes! I have the cutest, most adorable Great Dane puppy named Leif. He is 8 months old and already over 100 lbs! He looks like Scooby-Doo and Marmaduke. I am a very proud dog Mom.
Don’t miss the chance to see Rachel in the Madison Opera premiere of the beautiful Florencia en el Amazonas. Performances are April 27 and April 29 in Overture Hall.  Tickets start at $18; visit madisonopera.org for more information.

0 comments on “10 Questions with Rachel Sterrenberg”