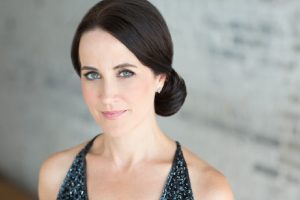 
1.  Where were you born and raised?
Hatched in a place long ago and far away, but raised in Miami, Caracas, and Houston.
2.  If you weren’t a singer, what profession would you be in?
Art Historian, architect, or explorer.
3.  The first opera I was ever in was…
Gianni Schicchi!

4.  My favorite opera is…
The Marriage of Figaro.
5.  My favorite food to cook or eat is…
…almost anything Mediterranean.
6.  People would be surprised to know…
My Cuban grandfather was a major league pitcher with the New York Giants.
7.  If I could cruise down any river in the world, it would be …
… Amazonas!
8.  I like to binge-watch…
I like to binge-read Graham Greene, Trollope, Zadie Smith. Ok, ok, I watch some things too – Versailles, The Marvelous Mrs. Maisel, The West Wing, The Queen, and Victoria.
9.  What four people would you like to invite for a dinner party?
Shakespeare, Camille Claudel, Leonardo da Vinci, Eleanor Roosevelt.
10.  Everyone should see Florencia en el Amazonas because….
It’s sensual, beautiful, and speaks to our deepest longing.

11. Bonus: One question you wish someone would ask you (and the answer).
Q: (Asked by someone who is a really good dancer) Would you like to dance?
A: Yes.
Don’t miss the chance to see Adriana in the Madison Opera premiere of the beautiful Florencia en el Amazonas. Performances are April 27 and April 29 in Overture Hall.  Tickets start at $18; visit madisonopera.org for more information.

0 comments on “10 Questions with Adriana Zabala”