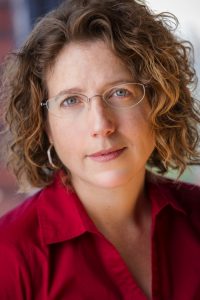 Kristine McIntyre
Stage Director of Florencia en el Amazonas
1.  Where were you born and raised?
Philadelphia, then San Diego.
2.  If you weren’t a stage director, what profession would you be in?
A film director or a doctor (I was pre-med in college. I was supposed to be a neurosurgeon).
3.  The first opera I ever directed was…
The Barber of Seville – remounting a production for the WOT tour. First show of my own was Dialogues of the Carmelites!

4.  My favorite opera is…
…whatever I’m working on at the moment. Seriously, directing is like falling in love. You should be faithful – at least for a while.
5.  My favorite food is…
Chocolate. In every form.
6.  People would be surprised to know…
I love baseball and knitting.
7.  If I could cruise down any river in the world, it would be …
…through the fjords of Norway.  It looks so beautiful.
8.  I like to binge-watch…

9.  What four people would you like to invite for a dinner party?
Dorothea Lange, Josephine Baker, Margaret Atwood, and Frances McDormand.
10.  Everyone should see Florencia en el Amazonas because….
It’s awesome, you’ve never seen it before, and nothing beats contemporary opera with great music.
Don’t miss the chance to see Kristine’s production of Florencia en el Amazonas, a Madison Opera premiere. Performances are April 27 and April 29 in Overture Hall.  Tickets start at $18; visit madisonopera.org for more information.

0 comments on “10 Questions with Kristine McIntyre”