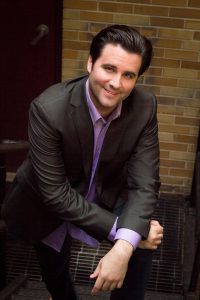 1.  Where were you born and raised?
I was born and raised in Janesville, Iowa, a little over a 3 hour drive from here.
2.  If you weren’t a singer, what profession would you be in?
Possibly something in real estate, or something involving the environment.
3.  The first opera I was ever in was…
In my sophomore year at the University of Northern Iowa, I was the scribe Ezekial Cheever in The Crucible.

4.  My favorite opera is…
It’s hard to beat Carmen for me. I do enjoy all genres,  but operas more in the verismo realm are what I find myself drawn to more often than not. It’s all about the drama for me.

5.  My favorite food to cook or eat is…
I love all foods, but if you twisted my arm I’d have to say taco pizza – a beautiful Midwest creation that I have to have every time I come back home to Iowa.
6.  People would be surprised to know…
I was an all-conference point guard in high school, and almost pursued it to a small school in Iowa before I decided to give music my full attention. I even dunked a basketball a few times; however, that was many years ago. I still play a mean game of HORSE though!
7.  If I could cruise down any river in the world, it would be …
Am I taking the easy way out if I say the Amazon? I honestly think that would be incredible, minus the mosquitoes. I’d also love to take a trip down the Rhine. I recently took a trip to Europe and saw the Rhine in all its beauty when I was in Basel, Switzerland. I’ll never forget seeing a man swimming along with the current in a wetsuit (this was in November) and stopping mid-stroke to wave at me.
8.  I like to binge-watch…
Where do I begin? Netflix has allowed me the ability to binge probably too many shows. I’ll start with the most appropriate title when it comes to binging – Shameless; followed by Game of Thrones, The Office, Family Guy, and too many more to name.
9.  What four people would you like to invite for a dinner party?
Teddy Roosevelt, Neil Armstrong, Luciano Pavarotti, Steve Carell.
10.  Everyone should see Florencia en el Amazonas because….
Who wouldn’t want to be part of a voyage down the Amazon? It’s an exotic story filled with beautiful music. What more could you ask for?
Don’t miss the chance to see Mackenzie in the Madison Opera premiere of the beautiful Florencia en el Amazonas. Performances are April 27 & April 29 in Overture Hall.  Tickets start at $18; visit madisonopera.org for more information.

0 comments on “10 Questions with Mackenzie Whitney”