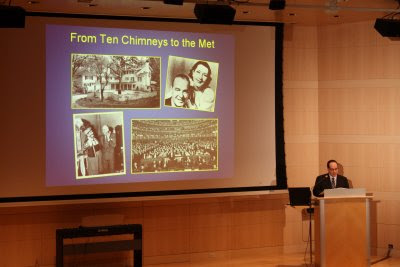 If you were at Opera Up Close yesterday, you’ll know what I’m talking about in the post title. General Director Allan Naplan’s preview of Cosi fan Tutte was a hit, and asides from all of the laughing the audience did, they surely learned a ton too. We were transported to Salzburg and Vienna, and learned of Mozart’s great gifts as a child. We saw the progression of his operatic writing, and learned that Cosi was commissioned by Emperor Joseph II, who likely provided the idea for the plot based on a story he heard while at war with the Turks.

Did you know that Cosi was Jacqueline Kennedy’s favorite opera? Well, that came up too, with Allan providing exciting (photoshopped) footage of an infamous incident at one of Kennedy’s “Concerts for Young People”: during a performance of Cosi at the White House, Ferrando’s turban caught fire on a wall sconce. And pictured above is the start of the segment “From Ten Chimneys to the Met,” a special exploration of Wisconsin native Alfred Lunt’s historic production of Cosi fan Tutte for the Metropolitan Opera, which is largely responsible for reviving the work’s popularity in the US. With never before released images from the Met, Allan shed light on Lunt’s masterful interpretation and his comic dealings with opera singers (he at one point said their acting was like “cold, rancid oatmeal”).

And that was just the first half of the presentation. After intermission, conductor Kelly Kuo and director Kristine McIntyre came out to talk about their views on Cosi. Kelly demonstrated on the keyboard how recitative in Mozart operas works much like accompaniment for silent movies. He also clued us in on why he thinks certain woodwind instruments in the orchestra represent different characters in the opera.

Kristine spoke about the comedy in Cosi, relating it to smarter, more subtle sitcoms like Frasier because it’s about fairly normal–if exceptionally witty–people finding themselves in extraordinary situations. She says she has emphasized to the cast that the action takes place in Naples, which at the time was a seaside resort (“It’s summer, it’s warm, you’re away from home on vacation…”); in essence, the characters adopt a “What happens in Naples, stays in Naples” mentality, which allows for them to act outside their typical behavior, to be extra flirty and silly. But actions have consequences, and that is where the line between comedy and drama blurs in Cosi. This conversation led to a discussion of the opera’s ambiguous ending. There is a question as to whether the couples end up back together in their original formation, or whether they have switched, or whether anyone gets together at all; one’s interpretation of this represents how seriously one takes the notion of forgiveness in the opera. Our director takes it seriously, but you’ll have to see what exactly that means onstage for yourself.

0 comments on ““What happens in Naples, stays in Naples””