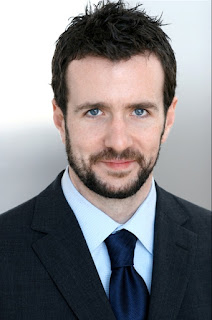 1.  Where were you born / raised?
I was born and raised in Brookline, Massachusetts, but am now a proud Dairy Stater, living with my wife and two kids in La Crosse.

2.  If you weren’t a singer, what profession would you be in?
Professional soccer player, if I were good enough, which I’m not!  I’d love to say a chef but would hate the hours.  More likely law or education.

3.  The first opera I was ever in was…
Falstaff, in the chorus at Tanglewood when I was in high school.  I’ve known that fugue since I was 16.

4.  My favorite opera is…
Depends on way day you ask me.  Could be… L’Incoronazione di Poppea, Le Nozze di Figaro, Carmen, Don Carlo, The Rake’s Progress, Eugene Onegin, Nixon in China, St. François... you get the idea.

5.  My favorite pre/post-show meal is…
Pre-show, anything spicy.  Post-show is the same, except with a Guinness.

I can’t wink my left eye.  The right isn’t so great either.

7.  A few of my favorite books are…
The Brothers Karamazov, All the King’s Men, Me Talk Pretty One Day, and Thinking, Fast and Slow.

8.  If we were to turn on your ipod right now, what five artists/songs would we see on your recently-played list?
You’d see mostly podcasts- Snap Judgment, Wait Wait, Don’t Tell Me, This American Life.  As for music you’d see mostly soul and R&B: Otis Redding, Nina Simone, Stevie Wonder, and lots of Tribe Called Quest.

9.  What is the worst costume you’ve ever worn? Or if no such costume, what was the best costume?
The answer to both was the Bonze costume from the Sydney Opera production of Madama Butterfly, which involved lots of red body paint and a bald pate.  It looked super cool but took several extremely uncomfortable hours to put on and take off.

Bonus:  One question you wish someone would ask you (and the answer):

These days, with an infant and a toddler in our house, the question is would you like some coffee?  The answer will always be “yes.”

Don’t miss the chance to see Liam in La Bohème, one of the greatest operas of all time!  Performances are November 13 and 15 in Overture Hall.  Tickets start at $18; visit madisonopera.org for more information.