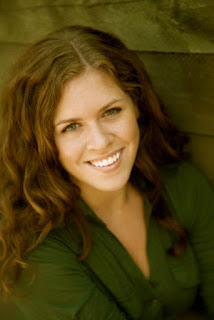 1.  Where were you born / raised?
Minnesota born and raised!  Specifically born in Edina and raising in Bloomington.

2.  If you weren’t a singer, what profession would you be in?
My senior year of high school, I had two paths… Music at University of Minnesota or architecture at College of St. Benedict.  So I almost went to college to design buildings.  It’s probably a good thing that I didn’t go into that.

3.  The first opera I was ever in was…
Freshman year of college, I was a chorister in Mozart’s The Marriage of Figaro.

6.  People would be surprised to know that…
I’m legally blind without my contacts.  So if I’m woken up at night, I may hit whoever is doing the waking (even if it’s my fiancé… because I can’t see!)

7.  My favorite book to read growing up was…
Harry Potter!

8.  If we were to turn on your ipod right now, what five artists / songs would we see on you recently-played list?
Adamo’s Little Women, Donizetti’s La Fille du Régiment, Adele’s 25, Postmodern Jukebox.

9.  What is the worst costume you’ve ever worn?
In college, I played Papagena in The Magic Flute.  The “old lady” costume was only a black cloak, basically with football padding sewn in.  I was a black bob!

10.  Everyone should see Little Women because….
It’s a beautiful story and there won’t be a dry eye in the house!

Bonus:  One question you wish someone would ask you (and the answer):
I am recently engaged, so…
Q:  Would you like a $10,000 bonus for your dream wedding?
A:  YES!

Don’t miss the chance to see Cassandra in Little Women, as this beloved American classic comes to vivid musical life!  Performances are February 5 and 7 in the Capitol Theater.  Tickets start at $25; visit madisonopera.org for more information.