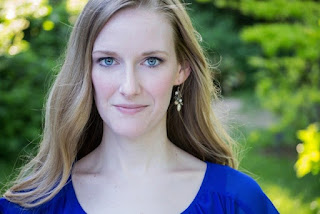 1.  Where were you born / raised?
Born in Richland Center, Wisconsin.  Raised in Stoughton, Wisconsin.

2.  If you weren’t a singer, what profession would you be in?
I WISH I could be a dancer, but realistically, probably a teacher.

3.  The first opera I was ever in was…
Dido and Aeneas, playing Belinda.

4.  My favorite opera is…
Der Rosenkavalier, unless I happen to be listening to Peter Grimes or Falstaff.

5.  My favorite pre/post-show meal is…
Pasta and veggies.

6.  People would be surprised to know that…
I once broke my toe during the final dress rehearsal of an opera when the leading tenor fell on it.

7.  My favorite book to read growing up was…
A Wrinkle in Time.

8.  If we were to turn on your ipod right now, what five artists / songs would we see on you recently-played list?
David Bowie, Harry Connick, Jr., Ingrid Michaelson, Lake Street Dive, and Ella Fitzgerald.

9.  What is the worst costume you’ve ever worn?  Or if no such costume, what was the best costume?
My most recent costume (as the Queen of the Night with Minnesota Opera – in the Komische Oper Berlin production) was basically a sleeping bag.  We called it the cocoon, and it had to be put on just before I appeared onstage because I couldn’t walk in it.  Its function was to be a background for projected images, so the effect was great, but backstage I looked hilarious.

10.  Everyone should see Little Women because….
The book is such a classic, and the opera has become one as well.  It is a timeless story of growing up and family, and Adamo’s music brings the characters to life in a wonderful way.

Bonus:  One question you wish someone would ask you (and the answer):
Q:  What do you think about on the toughest days, when it seems like nothing is going right, your whole life is collapsing, and depression is inevitable?
A:  DOGS.  And then everything feels alright again.

Don’t miss the chance to see Jeni in Little Women, as this beloved American classic comes to vivid musical life!  Performances are February 5 and 7 in the Capitol Theater.  Tickets start at $25; visit madisonopera.org for more information.